"Dear Friends and newest Anciens of the NATO Defense College,
We did it!

I am so proud of Senior Course 136, the Faculty, staff, and supporters of the College who made graduation this week possible! Each course is unique in its own way but no one could have expected COVID-19 to affect us the way it did. Senior Course 136 is likely to go down in the history of the College as its most resilient class. COVID-19 challenged the College in many ways, but staying the course, delivering the Senior Course curriculum on-line for three months and getting SC 136 “across the finishing line” this week was an incredible demonstration of adaptability, grit, and cohesion. 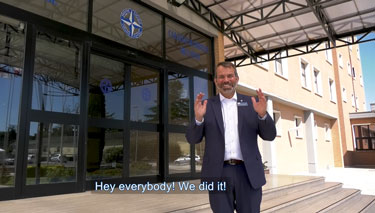 We also welcomed French Lieutenant General Olivier Rittimann as the 30th Commandant of the NDC. He comes to us from the Supreme Headquarters Allied Powers Europe (SHAPE) where he served as Vice Chief of Staff. He’s no stranger to NATO and you can read more about his career here. Bienvenue, mon GÃ©nÃ©ral!

Latest COVID-update: we are finalizing preparations to welcome Senior Course 137, NATO Regional Cooperation Course 24 and all the other NDC courses in the fall. We’ve made a short video to show you some of the measures we’ve taken to prepare for the next semester and protect ourselves from a potential “second wave”. The team has been working hard and demonstrated that we’re all in this together. Unitatem Alentes â for unity we strive, so let’s strive together.