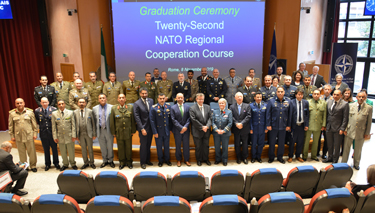 Nineteen students from 12 nations graduated, on 15 May 2009, from the first full ten-week NATO Regional Cooperation Course (NRCC 1). ). On 8 November 2019, the NATO Defense College celebrated the 10th Anniversary of the NATO Regional Cooperation Course, and 32 participants from 17 NATO, Mediterranean Dialogue, Istanbul Cooperation Initiative, PfP as well as Global Partner countries graduated from NRCC 22. To date, the NRCC has been attended by 664 participants from over 35 nations.