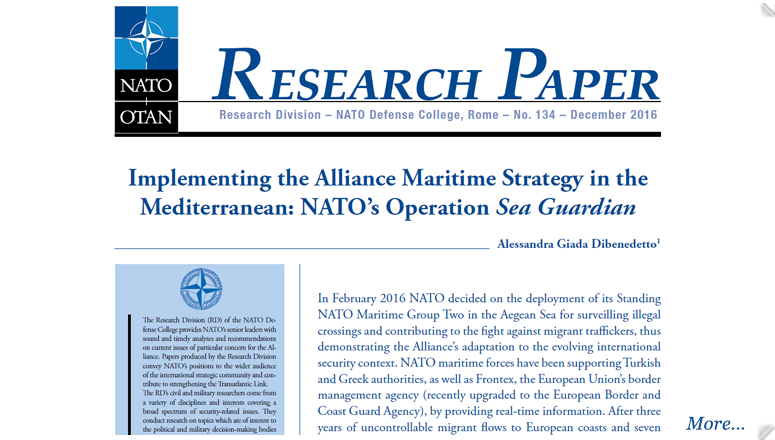 In February 2016 NATO decided on the deployment of its fleet in the Aegean Sea for conducting surveillance, collecting information and contributing to the fight against migrant traffickers, thus demonstrating the Allianceâs adaptation to the evolving international security context and its willingness and ability to guarantee support to its member states.

At the July 2016 Warsaw Summit, after three years of uncontrollable migrant flows to European coasts, the Alliance decided to join the EUâs efforts in the wider Mediterranean Sea, as both organizations face the same security challenges. On 9 November 2016 NATO launched a new and flexible mission in the Mediterranean waters: Operation Sea Guardian, which represents the implementation of the task of maritime security operations as outlined in the March 2011 Alliance Maritime Strategy.

Operation Sea Guardian is charged with numerous functions and responsibilities such as providing maritime situational awareness, countering terrorism and human trafficking and contributing to regional capacity building. It is expected to contribute to securing the maritime environment, provide crisis response and enhance partnerships as well as cooperation.

The latest paper by the NDC Research Division explains NATOâs broad new maritime operation, outlining its genesis and its cooperation with the EU mission in Mediterranean waters. By locating the operation in the context of the Alliance Maritime Strategy, the paper assesses expectations, prospects for success, pending issues and the areas in which the operation will be a test case for the Alliance.

We hope you enjoy reading this Research Paper published at the end of a challenging year for all Allies involved in the uncertainty and insecurity coming from the southern flank.
Regards,