NATO Nuclear Deterrence after the Warsaw Summit: An Academic Conference at the NDC

On December 5-7, 2016 the NATO Defense College hosted the 2nd annual NATO Nuclear Deterrence workshop in Rome, entitled "NATO Nuclear Deterrence after the Warsaw Summit." The workshop was co-sponsored by two other organizations: IRSEM, the Institute for Strategic Research (French Ministry of Defense); and the NATO Nuclear Policy Directorate (NPD). This seminar supported the NPD as part of their ongoing effort to assess the Allianceâs efforts to deal with the new security environment, help educate the current Alliance leadership on the importance of this mission, and identify changes in strategy, planning, or force structure that may be required to ensure the continued viability of Article 5 of the Washington Treaty and the deterrence mission. NDC welcomed the financial and intellectual contributions of IRSEM to this important annual event. 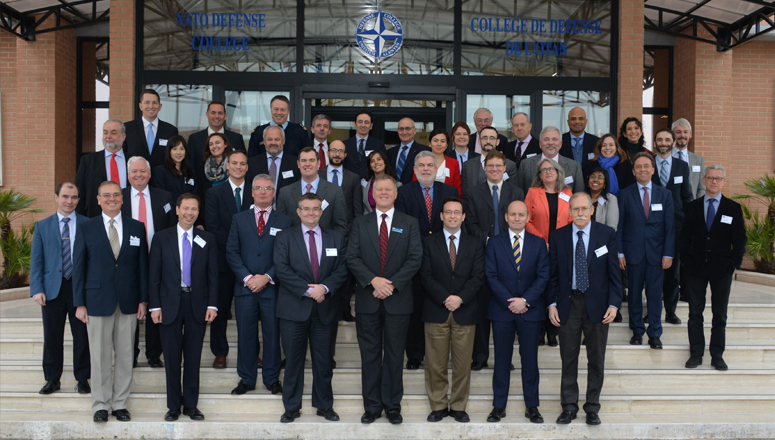 The return of Russia as a global competitor and potential adversary to the East and North, as well as the rise of Daesh and other forms of instability in the South, has returned collective defense to the top of NATO's agenda. This was made clear by the language in the July 2016 Warsaw Summit communiquÃ©, as well as by decisions taken to ensure more robust forward presence and defense and deterrent capabilities.

The 2016 Warsaw Summit communiquÃ© stated that âThe greatest responsibility of the Alliance is to protect and defend our territory and our populations against attack, as set out in Article 5 of the Washington Treaty. And so renewed emphasis has been placed on deterrence and collective defence.â This was followed by some of the strongest language endorsing nuclear deterrence in a NATO document in more than two decades.

Against this background the NDC Research Division hosted this seminar on deterrence and nuclear policy at the NATO Defense College in Rome. The conference was the second in this series, but actually continued a legacy of workshops on this topic going back nine years. The Research Division previously hosted conferences on deterrence in 2008, 2010, and 2012. This yearâs event included some 53 participants and speakers from 15 countries, including representatives of NATO Headquarters, SHAPE Headquarters, the NATO School, NATO Joint Force Command Naples, the French and UK Ministries of Defence, US National Defense University, US Naval Postgraduate School, US State Department, multiple think tanks and universities in Europe, Israel, East Asia, and North America, and several members of the NDC faculty.

The conference program included an update on NATO nuclear strategy, deterrence, and the Warsaw Summit; a similar update on Russian strategy and the role of nuclear weapons in its foreign and defense policy; a roundtable on developing a more systematic approach to raising NATOâs nuclear and deterrence understanding; a panel on the prospects for NATO grand strategy and the role of nuclear forces in that strategy; panels on nuclear developments in East Asia and the Middle East; and a wrap-up session that focused on the implications of the speaker presentations and discussions for NATO nuclear strategy.

All conference attendees left satisfied that the issue had been thoroughly considered, and they look forward to the 3rd annual deterrence conference next fall, tentatively scheduled in November 2017. In addition, the Research Division looks forward to continued collaborative efforts with its new partner IRSEM on other topics.