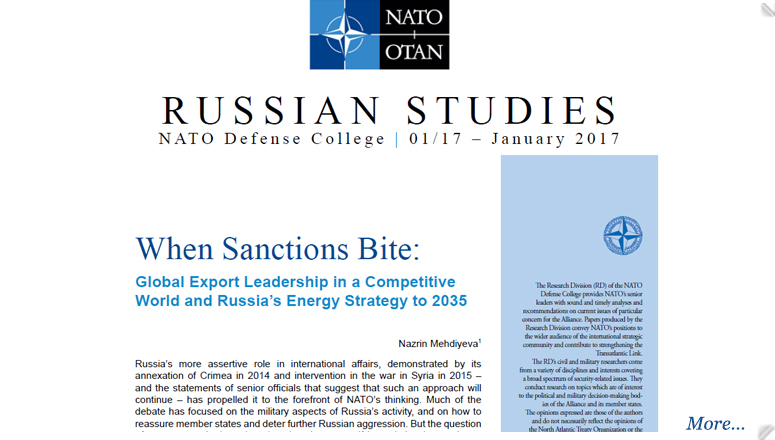 Welcome to the second paper in the Russian Studies series. This issue has been written by Dr Nazrin Mehdiyeva, a specialist in Russian energy, security and foreign policy. She provides a detailed examination of Russiaâs draft Energy Strategy to 2035, and argues that the draft strategy illustrates how Russian energy thinking has been undergoing an important evolution since 2014.

Her review of the draft strategy sits comfortably alongside the other papers in the series in the way it both emphasises how the Russian leadership engages in long-term strategic thinking and about how energy is one of the most important and complex elements of Russian national security thinking. Indeed, like Russiaâs economic thinking more broadly, she argues that thinking about energy is characterised by its synchronisation with national security, and Russiaâs geopolitical influence and sovereignty. Interestingly, she notes that the draft strategy is more in tune with Russiaâs National Security Strategy.

Mehdiyevaâs review of the strategy explores Moscowâs understanding of the changing international horizon since 2014, emphasising how differently the Russian leadership sees the world compared to the Euro-Atlantic community and in so doing illuminating how they see Euro-Atlantic communityâs sanctions, and how threat perceptions are driving import substitution and a drive to develop diversification of transit routes and markets. Importantly, she also notes how Moscowâs thinking about energy security is also driven by concerns about longer term, structural developments, including the role of the United States of America in international energy markets.

At the same time, Nazrin highlights the difficulties Moscow faces in developing its strategic agenda â not least the very great difficulties in accurate forecasting and the ongoing question marks over many of the basic assumptions on which such planning is dependent.

The thrust of Dr Mehdiyevaâs argument illuminates why NATO should remain keenly aware of Russian evolving energy thinking and policy, and we hope you enjoy learning more about this important subject.
Regards,

*Dr Nazrin Mehdiyeva specialises in Russian energy, security and foreign policy. She advises international organisations, governments and companies, and has over a decade of experience informing high-level decision-making in the private sector on energy security. She holds DPhil from the University of Oxford. Her book Power Games in the Caucasus was published in 2011 by I.B.Tauris. The views expressed are those of the author and do not necessarily reflect the opinions of the NATO Defense College or the North Atlantic Treaty Organization.