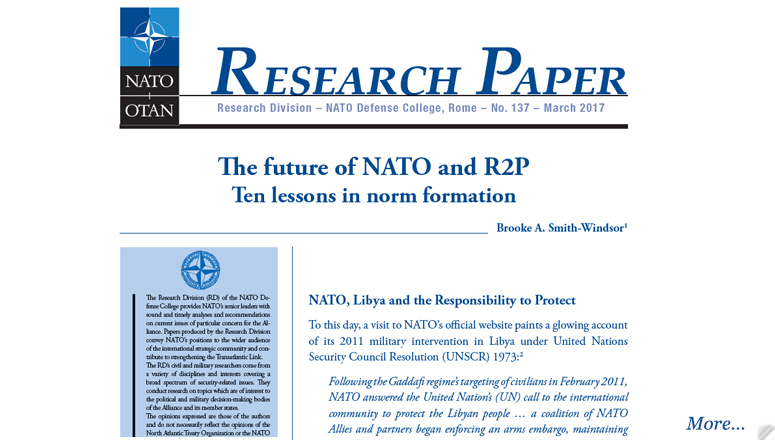 NATOâs 2011 intervention in Libya under UN Security Council Resolution 1973 is generally acknowledged as the international communityâs first attempt to operationalize the coercive provisions of the emergent international norm of the âResponsibility to Protectâ (R2P) civilian populations form mass atrocity crimes.

While immediate operational goals may have been achieved and urgent threats to lives in Benghazi and elsewhere averted, more than half a decade on the post-intervention legacy is far from rosy. What followed the collapse of the Gaddafi regime in October 2011 is a Libya and neighbourhood still rife with instability and violence, and lingering concerns that NATO and its member states exceeded their R2P mandate for other ends.

Learning from this experience, by reflecting and acting on the ten lessons provided in this new Research Paper, offers a starting point to a reinvigorated Alliance focus on a maturing international norm that corresponds to both NATOâs crisis management as well as cooperative security core tasks. At a juncture when a newly-minted US administration is questioning the Allianceâs relevance, this could not be timelier.