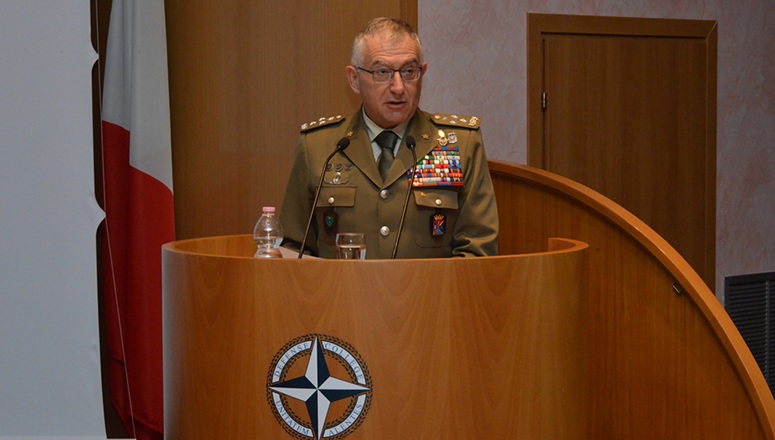 Senior Course 130âs first Field Study began in Rome on 20 March with excellent presentations from the Italian Chief of Defence (CHOD) and from officials representing the Ministries of Defence, of Foreign Affairs and of the Interior.

General Claudio Graziano, Chief of the Italian armed forces spoke about the daily communication between the different ministries regarding security. He underlined the whole of government approach, which is now necessary to cope with the multiple threats every country is facing. In describing these threats, he stressed that their combination is leading to a very complex situation that requires strategic depth for each country. This can be achieved on the one hand, with the development of capabilities by countries, and with strategic plans in particular being drawn up by international organizations (i.e. NATO, the EU and the UN). âItalian strategyâ, â General Graziano stressed â âis focused on the Mediterranean for obvious historical and geographical reasons. In all international fora as well as in terms of domestic policy, Italy promotes the development of strategies dealing with the security challenges emerging from the so-called âSouthern Flankâ of NATO and Europe, without shirking its responsibility, as an active and engaged member of NATO, in Eastern Europe.â

He then described the concrete contributions made by Italy to international and also national operations like âMare Sicuroâ in the Mediterranean, thus demonstrating Italyâs commitment to the Alliance, and how it implements the strategy described in its White Book. At the end of his outstanding presentation he kindly answered questions from Course Members.

Continuing with the demonstration of whole of government efforts, Course Members heard presentations from Major General Lorenzo DâAddario, representing the MoD, Sig.ra Federica Favi, Embassy First Counselor of the MFA and Colonel Giuseppe Lanzillotti from the Carabinieri, working for the MoI. They all emphasized the necessary complementarity between the EU and NATO from their different perspectives. From the Foreign Affairs standpoint, this complementarity is necessary to fulfill the current process of adaptation in NATO; from the military perspective it is necessary to contain todayâs crises and to prevent them in the future; and from the police perspective to better cooperate and use the different tools (Europol,Interpol) to address the different challenges Italy is facing too. The presentations were followed by a question and answer period.

In the afternoon, Course Members were invited to visit the Joint Operations Centre of the Armed Forces in Rome and were able to appreciate the concrete operationalization of the morningâs briefings, i.e. multi-operational complexity.

Course Members enjoyed a very informative programme for the first day of their first Field Study. Italy demonstrated the coherent and realistic approach adopted by all ministries, which is the result of a carefully drafted and implemented strategy.