For their second stop in the FS, SC130 was in Germany and received briefings in the Ministry of Defence in Berlin. Course Members and accompanying staff were welcomed by Dr Rudiger Huth, Deputy Chief Politics of the Directorate-General for Political Affairs, and by Navy Captain Alfons Altmeier, German Faculty Adviser at the NDC, who introduced the speakers and moderated the debates. 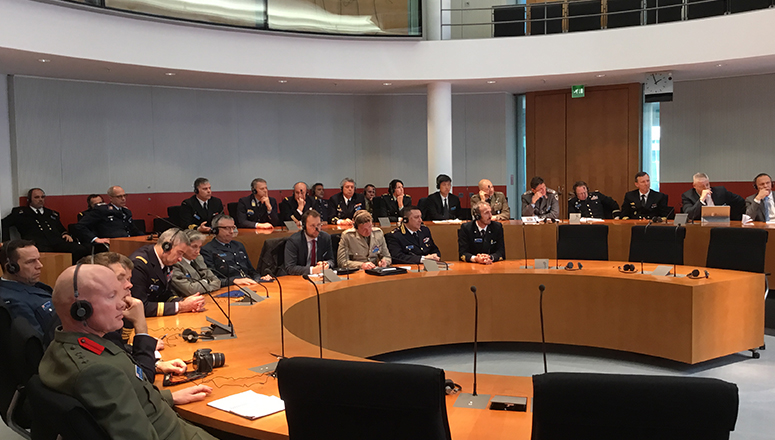 The first briefing was given by Col (GS) Andreas Durst from the Directorate General for Strategy and Operations who delivered an overview of German commitment to multinational operations. After describing global challenges and the different areas of conflict, Col Durst explained the change of priorities for Germany and showed how the country moved from International Crisis Management (previously the first priority) to an actual balance between Crisis Management and Collective Defence, reflecting current priorities. To highlight Crisis Management, he discussed some operations in which Germany is currently involved and focused on Afghanistan, Turkey and Mali. He then talked about the adaptation of the German Armed Forces to the evolution of NATO (which he described as NATO 3.0) and the EU (called EU 2.0) respectively, in the domain of Collective Defence and the military command structure. He clearly explained the consequences for Germany of this complex environment, for example in procurement. His detailed and in-depth analysis was very well received and appreciated by Course Members, who raised numerous questions at the end of the presentation.

The second presentation was by Navy Captain Hans-JÃ¶rg Detlefsen, Deputy Director for Security Policy. He presented Germanyâs security and defence policy, starting with a historical perspective and then an analysis of the security environment and security interests of the country. He also spoke about the changes in NATO from a policy perspective, and underlined the Warsaw summit results. He also provided a description of defence spending as a consequence of these results. On the EU side, he discussed PESCO and the required commitments of members. He also briefly addressed UN and OSCE significance for German security policy. He went on to discuss bilateral and multilateral cooperation (Eurocorps or the DEU-FRA Brigade, for example), as part of German security policy. Navy Captain Detlefsen ended his presentation with a review of homeland security and the use of the military in cross-ministerial activities (whole of government approach). He then answered questions from Course Members.

After a standing lunch and an excellent visit to the Bundeswehr memorial, SC-130 moved to another facility to meet members of the Foreign Affairs Committee of the Parliament (Bundestag). Mr Peter Breyer, Dr Ute Finckh-KrÃ¤mer, Mr Michael Vietz and Dr Katia Leikert, representing different political parties, presented some of the topics on the agenda in the Foreign Affairs Committee.

Mr Peter Breyer, as Chairman of the Committee, welcomed Course Members and talked mainly about NATO and especially the financial issue. He repeated that Germany has been committed to increasing its defence budget since 2014 and has effectively done so. On the subject of hybrid warfare, he underlined that Germany has taken some measures to respond to the threat, in accordance with EU and NATO membership. Dr Finckh-KrÃ¤mer spoke about the OSCE and the need for a renewal of the CFE Treaty (Conventional Forces in Europe) and for continuation of the support missions in Ukraine and Georgia. Mr Michael Vietz spoke about the importance of cooperation between military and civilian forces, and finally Dr Leikert underlined concerns about Syria. After short introductions, they answered questions from Course Members.

The visit was a unique opportunity for Course Members to meet parliamentarians and discuss German policy options, as well as to have a political overview of the current status of international relations. Discussions were profitable for both groups, since Course Members were able to give their personal views, in particular on hybrid warfare.

Germany displayed a great sense of hospitality and offered a high level of discussions throughout the day. The participants were grateful for this unique opportunity for exchange and learning.