The third main stop on the SC 130 European Field Study was London, just one day after the terrorist attack at Westminster. 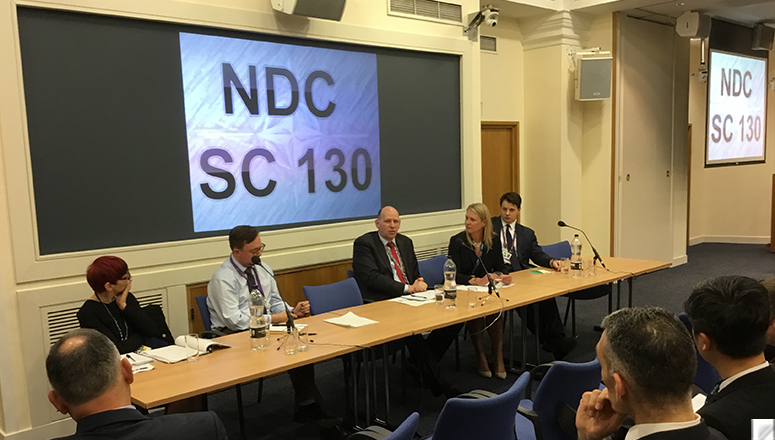 Course Members were welcomed by Mr Peter Watkins, Director General Security Policy at the Ministry of Defence, who is also an âAncienâ of the NDC (Course 83). In his opening remarks, he underlined the enormous importance of NATO for the United Kingdom and stressed the UKâs commitment to NATO. He spoke briefly about the evolution of threats and reminded participants about the decisions taken by the Alliance in Wales and Warsaw. In his short analysis, he talked about the necessity of flexible and adaptable forces. He concluded by highlighting the importance of bilateral and multilateral cooperation before answering the numerous questions from Course Members, mainly about Brexit, immigration, and British views on Russia. The questions raised not only demonstrated the keen interest of Course Members and the quality of the speaker but also the importance of Field Studies and on-site visits, to interact directly with high-level representatives, policy makers and decision makers.

Following the introduction, Mr George Henes, from the Defence Strategy and Priorities Office, spoke about the UKâs global outlook and defence policy. He built his presentation around five questions: What are the challenges? What is the ambition? What is the policy? What resources are needed? And how to increase efficiency? Answers to these questions will define the future of defence and future forces. Keywords for a solution will certainly be internationalization, integration and innovation.

He then gave the floor to Mrs Lisa Chesney from the Foreign and Commonwealth Office. She described the importance of close international cooperation for the United Kingdom in the current strategic context. Taking many factors into account in her analysis, she qualified the present situation as a âflattening of powersâ, since states now have less control than before, due to the rise of non-state actors. This leads to complex relationships between states and therefore raises the importance of strengthening cooperation between members and partners.

Mr Giles Ahern, Head of Euro-Atlantic Policy, then spoke about resilience and the related role of NATO. This was particularly important for Course Members, as almost half are doing research on that topic; in particular because the UK developed the concept of resilience many years ago and is considered one of the leading countries in the subject. The speaker also gave an analysis of NATO-EU relations in view of the different threats and challenges, and spoke frankly about the difficulties. He briefly spoke about UK membership in the OSCE and the UN and the position of the United Kingdom on current issues, including Brexit.

After a coffee break, Course Members enjoyed a briefing provided by Mrs Valerie Evans, Head of the International Relations Group, on the UK defence industry. She explained the changes in the procurement policy and the acquisition cycle and used the example of the new strategy in 2016 on the construction of ships. She underlined the importance, in our time, of a competitive, efficient and innovative European Defence and Technological Industrial base to ensure the security of supply and the development of planned capabilities. This requires a flexible approach to the procurement model that the UK is trying to develop.

The last presentation was given by Mr Ian Millar from the International Development Department. He spoke about the activities of the United Kingdom in Development (UKAid), describing how conflicts are getting more complex and outlining the consequences for development. Explaining the cost of conflicts, he showed that development is also in the interest of the UK, and that strengthening resilience also contributes to the prevention of conflicts.

At the end of the presentations, a question & answers session was organized with all the speakers and Course Members made good use of it. The debate was moderated by Group Captain Scott Notman, the British SNR to the College. Course Members discussed all current security issues in Europe and the main security issues throughout the world with a UK perspective. This proved to be a very valuable, high-level and open session provided by the United Kingdom.