For its fifth stop during the European Security Perspectives Field Study, Senior Course 130 was in Luxembourg. Course Members were welcomed by the Deputy Chief of Defence, Col Alain Duschene, after some introductory remarks by Col Jan Abts, the Senior National Representative of Belgium and Luxembourg at the NATO Defense College and moderator of the day. 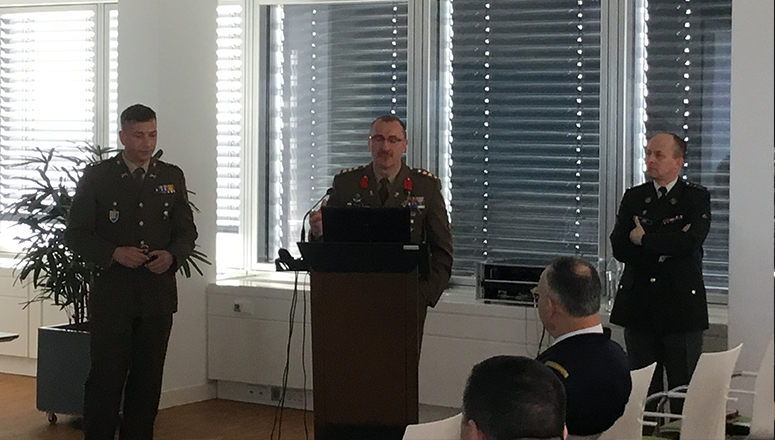 The first brief was delivered by LtCol Rohen from the General Staff. He presented an overview of the Luxembourg Armed Forces. He started with an historical introduction, followed by an analysis of current structures and future developments. He then explained the challenges, especially with regard to demographic trends, and also the development of capabilities. For the Luxembourg Armed Forces, air capabilities have become very important for their commitment to NATO; accordingly, new policy justifies the creation of an Air Command beside the existing Land Command.

The second briefing was by Mr Patrick Heck, Defence Policy Director at the Ministry of Foreign Affairs. He talked about security and defence policy, offering a unique perspective about policy in this domain from the perspective of a small country. He first presented the state of play in defence policy (with national missions and commitment to international missions), after which he focused on the countryâs challenges. For successful operations, he stressed that investing in capabilities is not sufficient: in the EU, for example, a strong decision-making structure is also required. Due to these challenges, the speaker indicated that Luxembourg is to publish a new defence policy later this year.

After the coffee break, Mr Chris Rose from the NSPA (NATO Support and Procurement Agency) took the floor. He explained the role and the structure of this organization located in Luxembourg and showed how the agency is working with NATO members and partners, considering them as customers. The main role of the agency is to bring support to operations and exercises (for example, in the domain of ammunition), but the Agency is also managing the NATO pipeline system and the NATO airlift system. In fact, this agency ensures logistic integration between industry (with sourcing from more than 10,000 companies) and customers. In view of the upcoming Study Period in Rome, this presentation was very useful to understand how strategic support to operations works in the background.

Mr Thielen then took the floor for the last presentation and gave an overview of the economy of Luxembourg. He showed the main figures and the main characteristics of the countryâs economy and presented a sectoral analysis. He explained how Luxembourg moved from its former dependence on the steel industry to a dominant role of the financial industry, and how fast the services sector is developing. But he also showed how the Luxembourg authorities try to diversify the economy, for example in terms of logistic support, biotechnology and environmental technologies.