The final round of visits of SC 130 for its Field Study on European perspectives took place in Zagreb. The participants were hosted by LtGen Slavko Barić, Commandant of the Croatian Defence Academy. 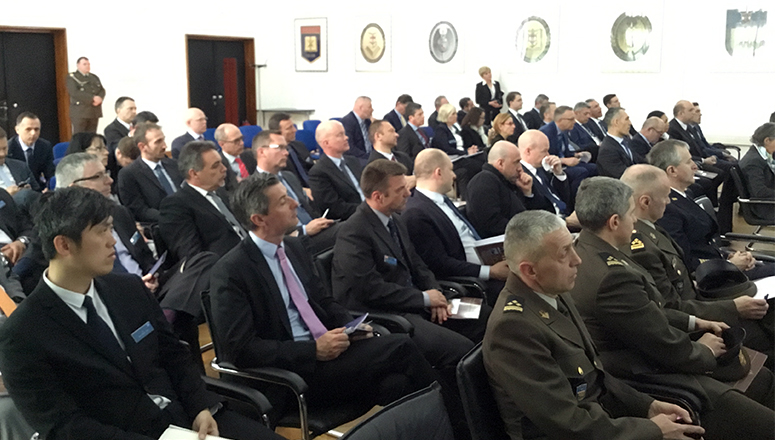 At the Croatian Defence Academy named after Dr Franjo Tudman, located within the Petar Zrinski Barracks, Course Members were given a first briefing on Croatiaâs security policy. The whole session was moderated by Mrs A. Hurum, Norwegian Senior National Representative at the NDC.

Dr Tomo Radičević from the Security Policy Department of the Ministry of Defence (MORH: Ministarstvo Obrane Republika Hrvatska, www.morh.hr) described the security environment of Croatia. Although the country does not perceive any direct military threat, potential for violence still exists in the Balkans. He described the region as now experiencing dynamic change and being historically turbulent. As a consequence, the security policy is based mainly on the development of a stable and secure environment. In view of these dynamic changes, he underlined the necessary evolution of the legal and conceptual framework (new security and defence legislation, a new national security strategy and a new law on homeland security). Besides these long-term challenges, the country faces short-term issues, for example halting the decline in the defence budget and renewing combat aircraft capabilities. At the end of the presentation, Course Members were shown how Croatia is involved in UN, EU and mainly NATO activities and operations.

Complementing the talk on Croatian commitment to the Alliance, participants received a detailed briefing and figures on the Croatian Armed Forces involved in NATO operations, for example in relation with the forward presence in the East. Dr Drago Kelemen also presented some figures about the involvement of Croatia in EU operations, in particular in those related to the migration issue.

After the coffee break Col Slobodan Čurčija, Dean of the Croatian Defence Academy, briefed Course Members on the history of the Academy and its different activities and courses. He stressed that this Academy, in cooperation with the University of Zagreb, is completely integrated into the Bologna process and this ensures the mobility of students, lecturers and the recognition of diplomas. He explained the type of officer training and education given at the Academy and also mentioned the courses for NCOs, which are very important for the Academy. At the end of his presentation, Col Čurčija spoke about multilateral and bilateral cooperation between the Academy, and the USA, Germany, Poland, Italy, Slovakia, France and Austria in particular.

The participants really enjoyed this last part of the Field Study, which consolidated their knowledge about the security and defence policy of the European countries visited. The whole Field Study was very positive. Course Members greatly appreciated the many discussions with experts and established contacts useful to their future careers.