The first round of visits by Senior Course 130 on Field Study 2 started in Brussels, where Course Members visited NATO Headquarters. They were welcomed by the Chairman of the Military Committee, Gen Pavel. In his introductory speech, he focused on current and future challenges for NATO, and mentioned both state and non-state actors in relation to these challenges. Since no nation can cope with them alone, NATO â as an alliance of nations â plays a fundamental role in dealing with them. Gen Pavel commented on some of the current discussions within NATO at the end of his presentation (mentioning, for example, the projection of stability, resilience and the financial aspects of defence), and answered questions. The NDC delegation was very grateful to him for having addressed them as the first speaker of their Field Study. 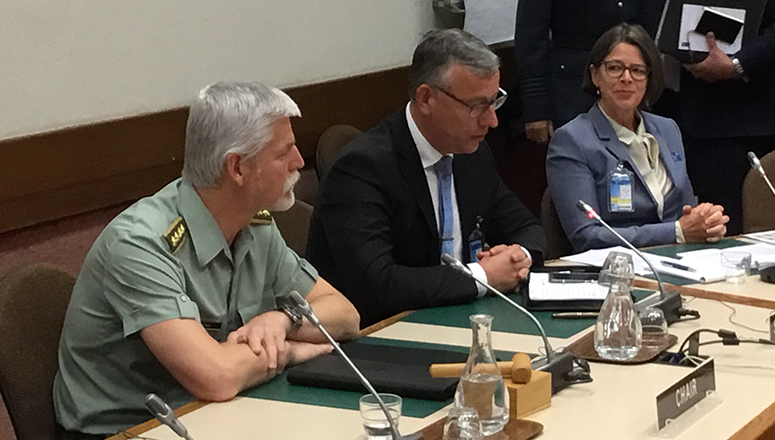 Following Gen Pavel, Mr Jonathan Hill from the International Staff (working for the Secretary General) presented the NATO mission in Afghanistan. He described the current situation in the country, taking all factors into account â for example, the relationship of the government in Kabul with the provinces. He also explained the role of NATO and he showed very clearly what âcomprehensive approachâ means in this case. As usual, he answered many questions from Course Members.

Course Members then focused on the decisions taken during the Warsaw Summit and their consequences. Mr Gabriel Bernier from the International Staff explained what are the current concerns of the North Atlantic Council, making particular reference to counter-terrorism (and especially the role of NATO) and burden sharing (considering not only finance, but also capabilities and contributions in general). After him, Mr Alexandros Papaioannou took the floor to explain NATO-EU relations and the consequences of Brexit for NATO. He showed very well how the relationship with the EU has been reinvigorated, based on cooperation in domains like hybrid warfare, strategic communications, cyber, exercises and capacity building. No less than 42 concrete areas of cooperation have been defined, supported by intensive political dialogue.

The last briefing was by Mr Metin Paksoy, a specialist on Russia from the International Staff. He used a historical point of view to explain current NATO-Russia relations and described NATOâs policy in this regard. He also spoke about the topics currently under discussion between NATO and Russia.

All the briefings were of a very high level, both informative and professional. They showed very well the role of NATO HQ, and what are the questions currently on the agenda at the political level. In conclusion, the visit was very valuable for all the Course Members.