Continuing their Field Study II, and following the visits to NATO HQ and the EU Military Staff, SC 130 visited SHAPE in Mons on the morning of Wednesday 3 May. Course Members were welcomed by MGen Sanz, Deputy Chief of Staff Resources, and received a detailed update on Russia by the J2 Division. The group was also able to enjoy in-depth briefings on Adaptation and Crisis Management and have a long discussion with BG Tak, Director of the Comprehensive Crisis and Operations Management Centre. 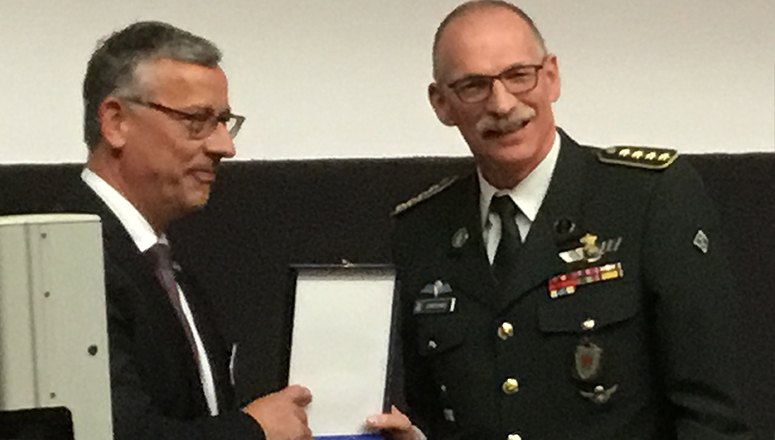 Back to Brussels in the afternoon, Course Members were welcomed by MG BouckÃ©, Assistant Chief of Staff for Strategic Affairs at the Headquarters of the Belgian Armed Forces, for a half day dedicated to the Belgian Armed Forces. For SC 130 to better understand the Belgian vision of security, Ambassador Michielsen, Director of Security Policy in the Federal Service of Foreign Affairs, took the floor for a talk on Belgian Security Policy. Multilateralism was highlighted as the main feature, with a focus on the countryâs membership of numerous international organizations â in particular NATO, the EU and the OSCE.

Col Breyne of the Strategic Department of the Belgian Defence Staff followed the Ambassador on the podium, to speak about the Strategic Vision of Belgium for the Armed Forces. He first described the challenges and the related core tasks of the Belgian Armed Forces: collective defence (NATO), collective security (Crisis Management) and Protection for Citizens. To fulfil these tasks, the Belgian Armed Forces need to rebalance their costs in personnel and maintenance and invest more. Col Breyne gave examples of how the Armed Forces will invest, essentially in modernizing equipment and acquiring new capabilities (for example, UAVs).

After the coffee break, Col Breyne explained the cooperation between the BENELUX countries, giving numerous examples of shared education and training programmes, procurement issues, but also cooperation on such points as common deployment.