After a long flight over the Atlantic, SC 130 landed in Montreal and travelled to the Canadian capital Ottawa. The group arrived on Friday, just two days after the announcement by the Canadian Minister of Defence about the soon-to-come National Defence Review (NDR) a new Defence Policy for Canada. 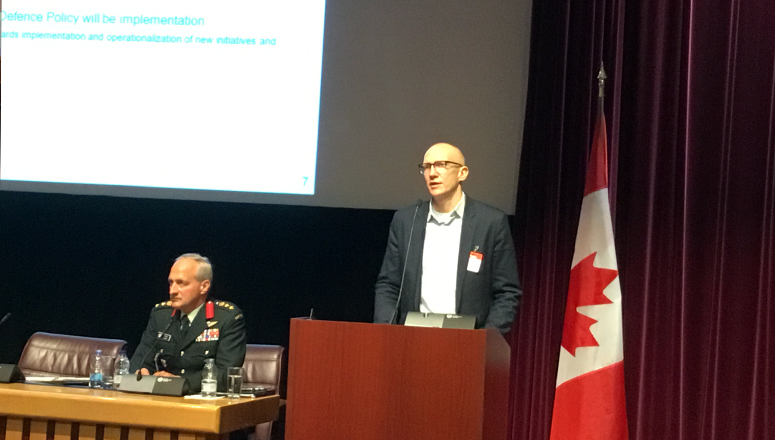 The Senior Course was welcomed by MG Derek Joyce, Director of General International Security (Policy), in the Global Affairs Canada facilities. Several âAnciensâ of the NDC were also invited to attend the dayâs briefings.

The first briefing was by Mr Gordon Venner, who spoke about the Canadian strategic setting. He described how Canada is integrated in the international security environment, highlighting the differences with the United States and Europe. He also spoke about the importance of NATO for Canada, and explained the countryâs current challenges. He then answered questions: Course Members were interested in the Canadian immigration policy and the countryâs views on the northern waterways, which are also a European concern. Mr Venner was followed by BG Russel, Director General Support/Strategic J4, who spoke about the role of the Canadian Armed Forces: the defence of Canada, the defence of North America (with the US), and contribution to peace and security. He showed the strength and organization of the Armed Forces, and spent some time to explain NORAD (North American Aerospace Defence Command), the result of an agreement between Canada and United States for aerospace warning and control as well as for maritime warning. He also explained the role of the SJS (Strategic Joint Staff) in operational decision-making and in ensuring the Canadian Armed Forces Posture and Readiness (FP&R) to maintain the operational level of capabilities. He ended his briefing with some words about the Rangers, a unique organization of Armed Forces in the north of the Country. He then answered questions.

In the afternoon, Mr Giles Norman, Executive Director of the Defence and Security Relations Division at Global Affairs Canada, presented Canadaâs foreign policy. Mainly based on transatlantic security, progressive trade, diversity and aid to the most vulnerable through multilateral and bilateral coordination and collaboration, the foreign policy of Canada gives priority to maintaining constructive relations with the United States and to ensuring coherence between defence, economic, foreign and other policies. He underlined the participation of Canada to the Enhanced Forward Presence of NATO, and Canadaâs role as a framework nation in Latvia. After answering questions, he gave the floor to Mr Jonathan Quinn, Director of Policy at the Department of National Defence (DND), to speak about the Defence Policy Review. This Review is the result of an intensive consultation process and will contribute to a coherent picture of Canadaâs strategic context, Canadian interests and values, and Government priorities for global engagement. It will be published very soon and defines clear priorities for defence, underlining such points as the importance of NATO for Canada, the commitment to NORAD and to UN peace support operations, the importance of advanced capabilities, the reform of defence procurement and the value of improving early warning.

The last speaker of the day, Rear Admiral Darren Hancock, Chief of Force Development, spoke about the development of Forces and Capability-based planning. Four important steps are to be considered for capability-based planning: it begins with a âconceiveâ (future security environment) and âdesignâ (description of needs) phase, is submitted to budget approval, and then ends with a âbuildâ (acquire and introduce) and âmanageâ (efficiency measurement) phase. The whole process involves numerous players, is consistent with NATO NDPP, and follows the ultimate objective of maintaining affordable and sustainable Forces. MG Valentin, Director of Operations at the NDC, thanked the Canadian Armed Forces on behalf of the College for the successful visit.

During this visit, Canada showed very dynamic Armed Forces, engaged in a pragmatic approach to coping with current and future challenges and strongly committed to NATO. The Staff and Course Members participating in this visit are very thankful to the Canadian National Defence Headquarters for the excellent organization of the day, the fruitful briefings and the open and frank discussions.