On 10th May, before leaving Washington, the Senior Course had the opportunity to hear complementary briefings at the Department of Stateâs facilities. 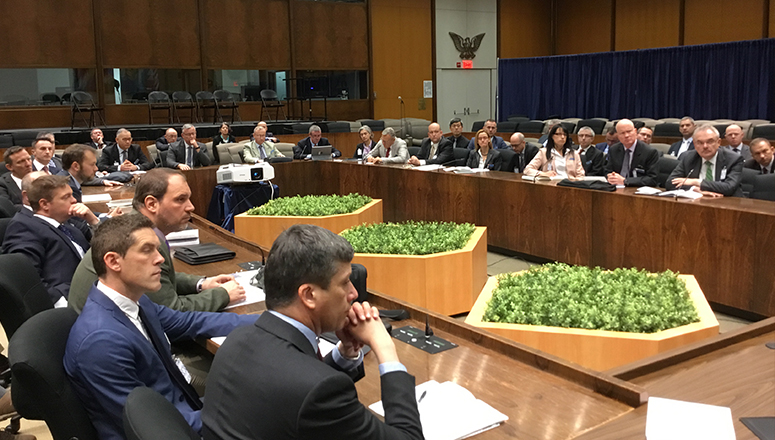 Later, Mr Mauricio Rios from the World Bank took the floor to talk about the role of the World Bank, describing the evolution of the organization over the last sixty years and giving details on how it works with governments (financing projects, for example) or with the private sector (helping to establish companies in Africa, for example). He explained the borrowing processes to support country development, but also showed how the 189 members of the World Bank work together through the Board of Governors, and how the Board takes decisions to reach the âtwin goalsâ of the World Bank: to end extreme poverty and boost shared prosperity by 2030.

In particular, World Bank efforts are concentrated in sub-Saharan Africa and South Asia. Course Members were particularly interested to learn, in this respect, that the World Bank helps to establish resilience - a topic that many Course Members are working on in their research papers.

The third briefing was supplied by Mr Patrick Cirillo, Principal Assistant to the Secretary of the International Monetary Fund (IMF). He is already known to Course Members, having briefed the Senior Course earlier this year on Economic Security. This time he focused on the IMF, explaining its origins and what it is today: a Bretton Woods organization, like the World Bank, and a global organization with 189 members. He described the different roles of the IMF: surveillance of the global economy and intervention to stabilize it if necessary, lending money where immediately necessary and in certain conditions, and supporting capacity development. These roles were likened to being a âdoctorâ, âfirefighterâ and âteacherâ for the global economy, in close cooperation with other organizations. IMF resources come from the Members as âmembership quotasâ, determined by their ranking in the global economy. In the speakerâs opinion, there is some good news: the global economy has gained in stability and a 3.5% growth is expected for 2017. But there are some short term risks and structural challenges â for example, inequality between countries, rising sovereign and corporate debt, productivity growth being too low and some issues with European banks. Here again, the key word for the IMF is âresilienceâ â i.e., to create more sustainable and inclusive growth through multilateral efforts.

This second day of the visit to Washington was again a success, helping Course Members to better understand the diplomatic and economic environment around defence activities, and giving them an overview of the organizations contributing to global security.