For its first stop on its third and final Field Study, Senior Course 130 met Polish authorities in Warsaw and received different briefings. What better place to discuss issues related to the Eastern flank of NATO? 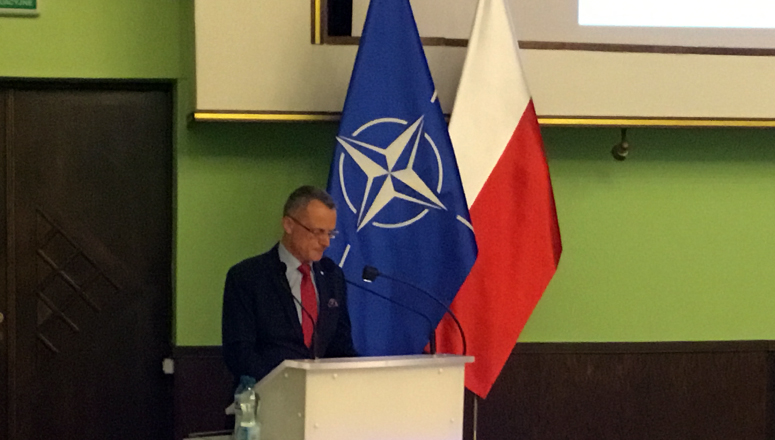 On the morning of June 13, Course Members met in the Conference Centre of the Polish Armed Forces. After a short introduction by Col Lucjan Murański, Col (ret) Czeslaw Juźwik, Deputy Director of the Armed Forces Supervision Department in the National Security Bureau, took the floor and spoke about the security of Central Europe. He defined Central Europe as comprising Austria, the Czech Republic, Germany, Hungary, Liechtenstein, Poland, Slovakia, Slovenia and Switzerland, mentioning that security in this area is influenced by many different dynamics at EU and world level (shifts in the balance of power, Russia, Middle East, Far East). He also explained Polish views on the Russia-Ukraine issue. The many initiatives which Poland supports include the Visegrad Group and the Three Seas Initiative. Supporting additional formats of cooperation is in line with the Polish aim to promote a proactive approach to security and defence, but the main security pillars of Poland are clearly NATO, the EU, strategic partnership with the US, and Polandâs own defence capabilities. After Col Juźwik, Col Szymon Koziatek spoke about the military aspects of the Wales and Warsaw Summits, explaining the different decisions related to the Readiness Action Plan (RAP) to strengthen collective defence and to the Warsaw Summit declaration regarding the Allianceâs role in preventing war. Besides details of the measures related to multinational troops and the NATO Response Forces, he mentioned Polandâs intention of achieving a defence budget equivalent to 2.2% of GDP in 2020, rising to 2.5% in 2030.

The third speaker was the Undersecretary of State for Economic Diplomacy, American and Asian Policy in the Polish Ministry of Foreign Affairs, Mr Marek Magierowski. He spoke about Polish priorities in foreign relations, beginning with a broad overview of the political situation in Europe and the Middle East from a Polish point of view. Once more, the importance of the security pillars mentioned earlier and of NATO-EU cooperation was highlighted. But he also spoke about other topics discussed at last yearâs Warsaw Summit, in particular Resilience (which is a very important topic in NATO at the moment, and also for many of the Course Membersâ Study Projects). He also mentioned the role of Poland in the UN and its recent membership of the UN Security Council.

The last speaker was Col Kowalik, Director of the Department of Military Foreign Affairs in the Ministry of National Defence, who spoke about the Future Defence Concept of Poland and the results of the Strategic Defence Review. Col Kowalik showed the methodology used to achieve the objectives: the creation of a holistic defence system, to respond to the most serious threats through a comprehensive re-thinking of existing defences. As a result, the concept of defence is based on A2/AD (Anti-Access/Area Denial), with strongly increased strike capabilities in all domains. This means not only considerable investment, but also clear R&D objectives. Moreover, this concept is related to the creation of a fourth division and a corps level command, which means a significant (gradual) increase in personnel.

These first briefings showed Polandâs real ambition to develop its forces, and also the consistency in terms of policy between the Ministries of National Defence and Foreign Affairs.