After Tallinn, SC130 moved to another member state of the Alliance which is also concerned about the Eastern Flank. Course Members were received in the facilities of the National Defence University (NDU) âCarol Iâ in Bucharest, Romania. Colonel Martin Iulian, Deputy Commandant for International relations at NDU, delivered the welcoming remarks and Colonel Mircea Gologan, Deputy J5 in the General Staff, took the floor first to speak about the Romanian contribution to NATOâs enhanced deterrence and defence posture. To set the scene, he briefly reviewed the main current challenges in Europe, described the development of the Romanian Armed Forces since 1991, and summarized the decisions taken by the Alliance at the Wales and Warsaw Summits. He then concentrated on the Romanian forward presence contributions, citing land, naval and air contributions. He gave details about the Multinational Brigade South-East in Romania and expressed his thanks to the Alliance for providing great support. He then described the situation in the Black Sea, the changes over the last years in this area and spoke about the Combined Joint Enhanced Training Programme (CJET) which offers a real Joint and Integrated approach to security for that region. In his conclusions, he showed how Romania intends to develop its forces up to 2026 and beyond, and confirmed Romaniaâs intention of reaching 2% of GDP in its defence budget. 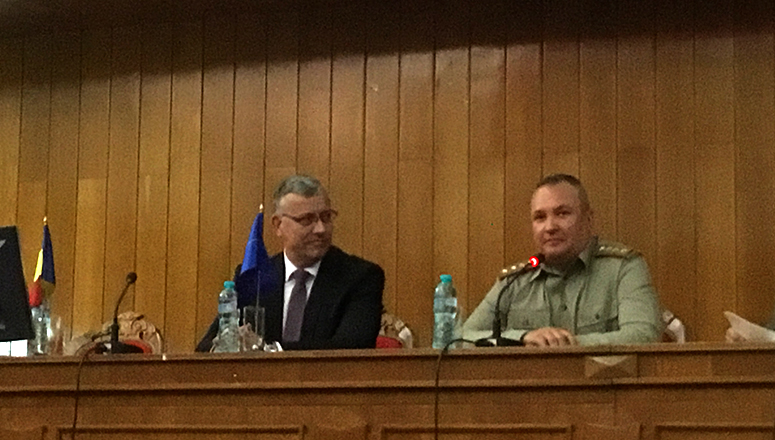 The Senior Course was particularly fortunate since the Chief of General Staff himself, General Nicolae-Ionel Ciucā, joined the Course during the questions and answers period and interacted directly with Course Members.

After a short break, Course Members were briefed on Romaniaâs foreign policy priorities. Mr Stefan Tinca from the Ministry of Foreign Affairs took the floor and elaborated on some of the pillars of Romanian Diplomacy. He insisted on the security dimension of diplomacy but also underlined Romaniaâs economic agenda. Throughout his presentation, the words âstrategic partnershipsâ came up many times in different contexts, confirming the countryâs spirit of cooperation, as demonstrated earlier with the different cooperation initiatives launched over the last few years with other Eastern European countries.

After a short break, Mr Iulian Chifu, Director of a Romanian think tank, made a presentation about general security issues. He started by discussing the notion of power and its evolution over the last few years and explained the consequences in international relations. He applied these results to the Black Sea region and showed the positions of the countries around the Black Sea. He then answered questions from Course Members.

Following him, Police General Dumitru Haralambie, Deputy Inspector General of the Romanian Border Police, from the Ministry of the Interior, described the activities, methods and equipment of the Border Police. He gave some details about illegal migration, FRONTEX cooperation and maritime cooperation. During the Q&A session he explained how the Border Police cooperates with NATO and international border cooperation in relation to EUROPOL. He also explained the passenger control system introduced in Romania.

After lunch, Course Members moved to the Technical Military University, where they were received by the Undersecretary for Armament and had the opportunity to hear a presentation on the Romanian Integrated Defence Acquisition Management System (IDAMS).

Again, discussions in Romania were exhaustive and complementary to the lectures heard in Rome, and covered all the domains of security, giving Course Members some concrete insights into the reality of the situation in the Eastern part of NATO.