For the second week of the current Field Study, SC130 left the Easternmost part of NATO to concentrate on the Balkans. The first visit took place in Belgrade. The Republic of Serbia is part of NATOâs Partnership for Peace (PfP) programme, and it was of great interest for the participants to hear about the relationship between Serbia and NATO. Again, the aim of the visit was to complement the information received from lectures and seminars in Rome. 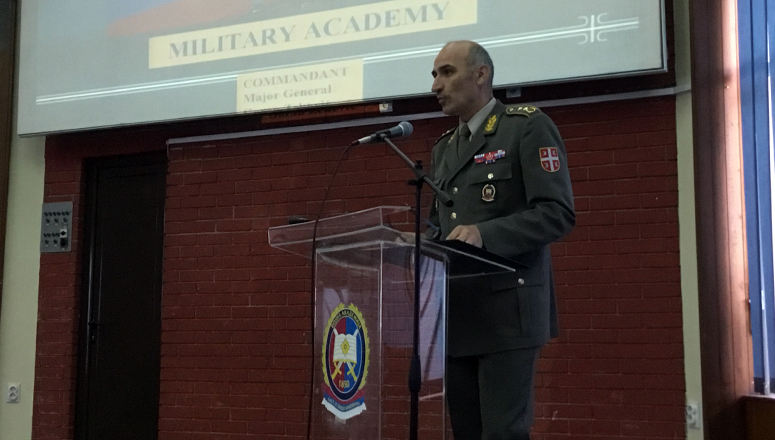 The Senior Course was welcomed by Major General Goran Zeković, Commandant of the Military Academy, after which Course Members attended a number of briefings and discussions in its facilities. The Commandant himself presented the Academy and its history, which is very important for Serbia. He also described the organization of the Academy, its different schools and levels contributing to the military and civilian education of the Serbian Armed Forces, and the range of qualifications delivered by the Academy, up to PhD level. MG Zeković also underlined Serbiaâs cooperation with many different countries and the international participation in the courses delivered in Belgrade.

Ambassador Branimir Filipović, Assistant Minister for Security Policy in the Ministry of Foreign Affairs, then took the floor to speak about the Security Policy of the Republic of Serbia. He underlined the Republicâs good relations with Russia and China, and its will to develop better relations with the United States and other countries, both bilaterally and also multilaterally (EU, UN, NATO and others). He underlined that Serbia is dedicated to maintaining stability in the region and to enjoying good relations with neighbouring countries. He also stressed that the EU is the best framework for the Western Balkans, hence the Republic of Serbiaâs clear pro-European policy. As a neutral country, Serbia wants to cooperate with NATO but also with Russia, and does not intend to be part of an alliance for the moment. Serbia has also made it a priority to fight terrorism and seek solutions to migration issues. Questions answered by the Ambassador included some about Kosovo.

Finally, Major General Milan Mojsilovic, Acting Assistant Minister for Defence Policy in the Ministry of Defence and former Serbian Military Representative to NATO in Brussels, started his presentation with an explanation of Serbian neutrality, before illustrating in detail the countryâs relations with the EU and its ambition to be part of the EU Battlegroups. He underlined the importance of the OCC (Operational Capability Concept) standards in NATO, which are equally useful for the EU.

The NATO Defense College is very grateful to the Republic of Serbia for its warm welcome and the openness of the various speakers during the discussions. This visit definitely enabled Course Members to better understand the region and Serbiaâs strategic role with regard to the main security issues in Europe.