After Belgrade, the Course Members and accompanying Faculty stopped in Montenegro. This was the first visit of a NATO delegation to Podgorica since Montenegro officially became a member of the Alliance on 5 June 2017, having been a member of the Partnership for Peace since December 2006. 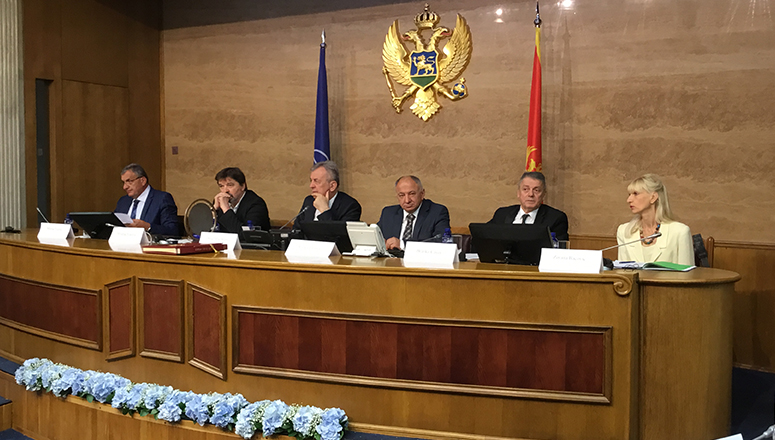 SC130 met a very enthusiastic and motivated team in Montenegro and was very warmly welcomed by the authorities. In his welcoming remarks, Mr Slobodan Filipović, State Secretary, Montenegro Ministry of Defence, expressed his pleasure in hosting this visit. He also told Course Members that they will be joined by Montenegrin colleagues in the future, because it is the intention of the MoD to send participants to the NDC Senior Course. On behalf of NDC Commandant LtGen Whitecross, Dean BG (ret.) F. Mičánek thanked the authorities of Montenegro for hosting this visit and congratulated the country on its accession to full membership of the Alliance.

Ms Alma Adrović, Head of the NATO & EU Department in the Ministry of Defence, then took the floor to explain the rationale for Montenegroâs membership and the countryâs regional environment. She also gave details of the accession procedure and told Course Members that the authorities are aware of the future challenges and ready to work side by side with all the other members of the Alliance. She also said that one of the next steps for Montenegro is to become a member of the European Union. LtCol Aleksandar Pantovic, Head of the Office of the Chief of Defence on the General Staff, then took the floor and gave a military perspective on accession to NATO. He explained all the steps in modernization for collective defence and described the structure of the Armed Forces and their current and future capabilities.

Ms Dubravka Lalovic, Director General, Directorate General for NATO and Security Policy in the Ministry of Foreign Affairs, underlined the great public support that the authorities received throughout the accession process and explained the context in which it took place. During this process the security situation in Europe changed considerably, considering the Southern and Eastern flanks of NATO. This made the reforms more complicated, also taking into account that NATO itself evolved during the process.

Mr Dragan Pejanovic, State Secretary and National Coordinator for NATO, Ministry of the Interior, took the floor as the final speaker. He explained that accession to NATO was related to a much broader reform of the security sector in Montenegro, and that several institutions in addition to the Armed Forces also experienced changes and reform. The accession process also made it possible to establish good bilateral relations with international institutions, while at the same time improving the emergency response system in Montenegro. He concluded by saying that membership of NATO brings obligations to the country, but is also a great incentive to push forward broad reform processes.

Later, the Course Members went to the Parliament and met representatives of the Security and Defence Committee from different political parties. Mr StaniÅ¡ić explained the political decisions that had to be taken to allow Montenegro to be a member of NATO. This required some important modifications of the law, in particular to allow the Armed Forces to participate in operations abroad. One of the main changes was to modify the law about the Security and Defence Committee, strengthening its role in the democratic control of Armed Forces. The speaker underlined the role of the Committee in maintaining continuity and supporting the reforms of the Armed Forces. He underlined that, even before 2020, Montenegro will fulfil the 2%-of-GDP defence spending pledge.

It was really a privilege for the NATO Defense College to be in Montenegro a few days after the countryâs accession to full membership of the Alliance. The entire delegation is grateful to the Montenegrin authorities for giving a broad overview of security in Montenegro.