For their last visit during this Field Study, Senior Course 130 and the Head of delegation BGen (ret) F. Mičanek landed in Slovenia. In the capital, Ljubljana, the participants were welcomed by the State Secretary of Defence Mr Miloš Bizjak, in the facilities of the Ministry of Defence. He told the audience that security in the NATO and EU area is affected by the so-called “belt of insecurity” around it. Slovenia, as a NATO and EU Member, wants to play its role and provide the necessary capabilities to the security organizations. 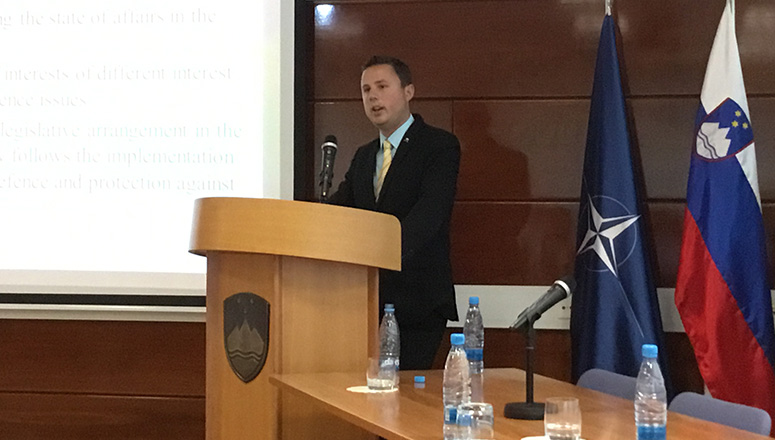 BrigGen Branimir Furlan, Deputy Director of the Defence Planning Directorate of the Slovenian Ministry of Defence, talked about the priorities and challenges for the Defence Policy implementation. Slovenia, since 2016, has been working to address critical issues identified by last year’s Defence Review. The national defence pillars are now defined accordingly (readiness, resilience, capabilities, collective defence) and the political decisions have been taken to implement measures in line with the related priorities (for example, adaptation of defence legislation, review of key defence documents, structural changes and modernization of the Armed Forces, and improvement of conditions for personnel). A key challenge is to achieve the 2%-of-GDP defence spending pledge, but a national plan has been developed.

A panel followed, with representatives of the Ministry of Foreign Affairs: Ms Alenka Košir, Head of Department for Southeast Europe; and Mr Peter Grk, National Coordinator for the Western Balkans. They discussed the political and military situation in the region. Mr Grk gave a short overview of Slovenia’s relations with the countries in the Western Balkans, and the security and economic challenges for the future. Ms Košir explained the background of the current situation, and the role of the EU and NATO in the region. She also gave some details about the challenges in Bosnia and Herzegovina, and explained the role of her country in maintaining stability in the region. Both speakers mentioned the importance of strategic communication and underlined regional economic factors.

The last briefing was by the Head of the Parliamentary Committee on Defence, Mr Žan Mahnič. He spoke about the role and responsibility of the Committee on Defence and described the main elements of the national security system and its structure. He also explained how the parliament maintains control of the security and intelligence services.

Finally, the NDC Dean thanked the Slovenian authorities for their warm welcome and their outstanding hospitality in Ljubljana. During this second part of the trip, dedicated to the Western Balkans, participants obtained a broad overview of the current situation in the Western Balkans and attended in-depth discussions about issues in the region. The Course Members greatly enjoyed the entire Field Study and found it a very enriching experience. They are grateful to the College for providing such an opportunity.