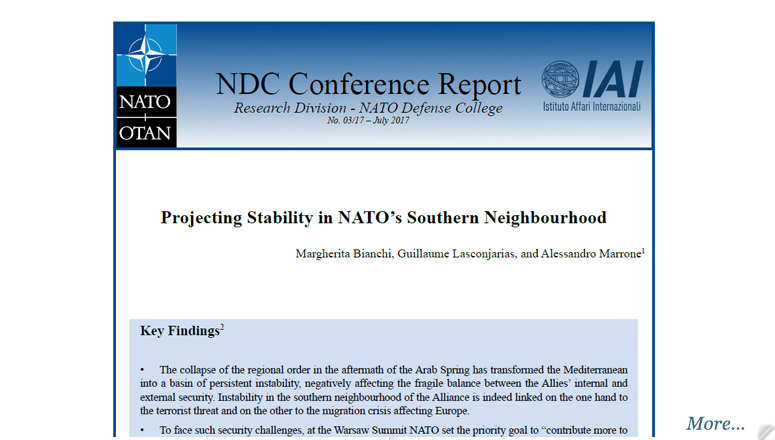 The latest conference report by the NDC Research Division builds upon the debate occurred within the seminar âNATO and the crisis south of Europe: Projecting Stability on NATO Southern Neighbourhood,â which took place in Rome on 14th March 2017.

Experts have referred to the southern neighbourhood of the Alliance with the fitting label of âdurable chaosâ: the collapse of the regional order in the aftermath of the Arab Spring has transformed the Mediterranean into a basin of persistent instability, negatively affecting the fragile balance between the Alliesâ internal and external security. Amidst economic, social and political factors, southern instability is linked to the terrorist threat and to the migration crisis. To face such security challenges, at the Warsaw Summit NATO set the priority goal to âcontribute more to the efforts of the international community in projecting stability and strengthening security outside our territory, thereby contributing to Alliance security.â

crisis, are all deep-rooted, complex and long-term challenges, which have worsened over the years and are not expected to improve soon. As a result, the Alliance has to prepare in conceptual, political and military terms to contribute to the security of its member states by making its southern neighbourhood more stable.
Regards,
Jeff