Senior Course 131âs first Field Study started in Rome on 2 October with excellent presentations from the Italian Chief of Defence (CHOD) General Claudio Graziano and from officials representing the Ministries of Defence, Foreign Affairs and the Interior. 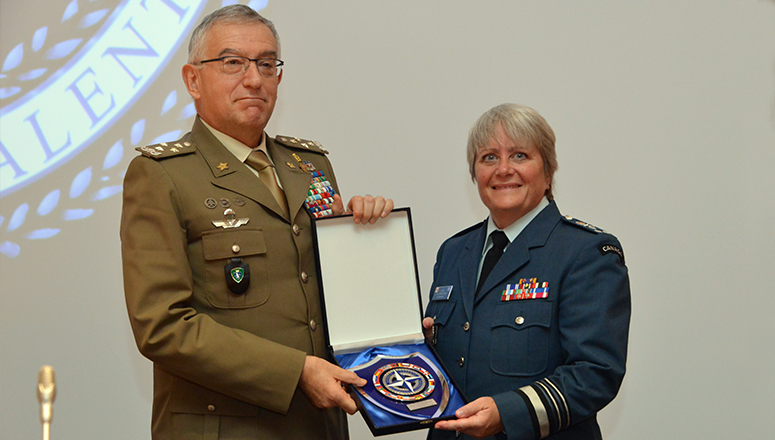 General Claudio Graziano, Chief of the Italian Armed Forces, praised the Field Study Programme as a great opportunity for development and personal growth offered to Course Members, providing them with the chance to be in contact with different countries. He then spoke about the most pressing topics in international security: the migration flows from the Sahel, international terrorism and the proliferation of transnational criminal organizations. General Graziano stated that âthis three dimensional approach needs to be simultaneously tackled and to do so we need all our capabilities in our handsâ. In order to cope with these crises, General Graziano defended the role of international organizations (i.e. NATO, the EU and the UN) and stressed the importance of their cooperation to raise operational effectiveness. Touching upon Italy and its strategic posture, General Graziano underlined the priorities and main interests of the country, mentioning the daily communication on security between the different ministries . âItalian strategyâ, â General Graziano stressed â âis focused on the Mediterranean for obvious historical and geographical reasons. In all international fora as well as in terms of domestic policy, Italy promotes the development of strategies dealing with the security challenges emerging from the so-called âSouthern Flankâ of NATO and Europe, without shirking its responsibility, as an active and engaged member of NATO, in Eastern Europe.â

He then described the concrete contributions made by Italy to international and also national operations, like the regional hub for the South, based at NATOâs Joint Forces Command in Naples. âHub for the South is a key answer able to build a bridge with the MENA region. It has to be conceived of as a control room for planning and implementing all southern activitiesâ the General stated. In his view, the hub represents another example of how Italy implements the strategy described in its White Book. At the end of his outstanding presentation he kindly answered questions from Course Members.

Continuing with the demonstration of whole of government efforts, Course Members heard presentations from Major General Lorenzo DâAddario, representing the MoD, Mrs Federica Favi, Embassy First Counselor of the MFA and Dott Ezio Gaetano from the State Police, working for the MoI. They all emphasized the necessary complementarity between the EU and NATO from their different perspectives. From the Foreign Affairs standpoint, this complementarity is necessary to fulfill the current process of adaptation in NATO; from the military perspective it is necessary to contain todayâs crises and to prevent them in the future; and from the police perspective, to better cooperate and use the different instruments (Europol, Interpol) to address the different challenges Italy is facing too. The presentations were followed by a question and answer period.

In the afternoon, Course Members were invited to visit the Joint Operations Centre of the Armed Forces in Rome, and were able to appreciate the concrete operationalization of the morningâs briefings, i.e. multi-operational complexity.

Course Members enjoyed a very informative programme for the initial day of their first Field Study. Italy demonstrated the coherent and realistic approach adopted by all ministries, which is the result of a carefully drafted and implemented strategy.