For its first stop abroad, SC 131 was in Germany and received briefings in the facilities of the Federal Ministry of Defence in Berlin. Course Members and accompanying staff were welcomed by Rear Admiral Jürgen zur Mühlen, Director for Security Policy in the Directorate General for Security and Defence Policy, and by Navy Captain Alfons Altmeier, the German Faculty Adviser at the NDC, who introduced the speakers and moderated the debates. 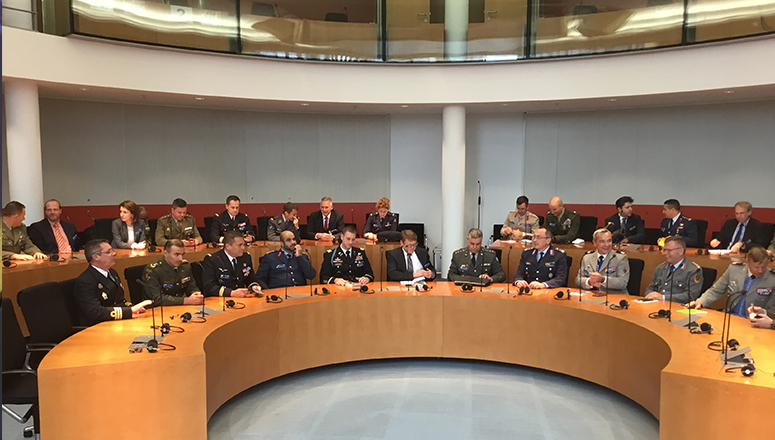 After his welcoming remarks, Rear Admiral zur Mühlen gave an overview of German Security and Defence Policy. In his introduction, he explained the political situation after the elections and then commented on the general security environment for Germany and the consequences for national security interests. He underlined that security is increasingly a joint task of the state, industry, the scientific community and society. He also spoke about the changes in NATO within a policy perspective and, in this regard, he underlined the effects of the Warsaw Summit on defence spending. On the EU side, he discussed the question of a European Defence Union. He also addressed the significance of the UN and OSCE for German security policy and continued with bi-/multilateral cooperation (e.g., Eurocorps or the DEU-FRA brigade). Rear Admiral zur Mühlen ended his presentation with homeland security and the use of the military in cross-ministerial activities (a whole of government approach). He then answered Course Members’ questions.

The second briefing was by Col (GS) Peter Paluch from the Directorate General for Strategy and Operations, who delivered an overview of Germany’s commitment to multinational operations. After presenting global challenges and the different areas of conflict, Col Paluch explained the main elements of the 2016 White Paper. He showed how Germany had changed its priorities and moved from International Crisis Management (previously its chief priority) to the current balance between Crisis Management and Collective Defence. He presented some of the missions Germany is contributing to, covering the entire threat spectrum (e.g., terrorism, piracy, migration), and explained how these are related to the White Paper. He also spoke about deterrence and defence activities, as well as contributions to nation building. In this way he showed very clearly the relationship between policy and operations and was able to offer Course Members a clear, practical and understandable illustration of the links between the two. At the end of his briefing, he spoke about the difficult and controversial question of the involvement of the Armed Forces at national level for internal security. His detailed and in-depth analysis was very well received by Course Members, who had the opportunity to ask many questions.

After an early afternoon visit to the Bundeswehr memorial, SC 131 moved to another facility and met with Members of the Parliamentary (Bundestag) Foreign Affairs Committee. Dr Ute Finckh-Krämer and Mr Jürgen Hardt, representing different political parties, explained the political situation after the elections and spoke about what the so-called “Jamaica coalition” means. They then discussed important current topics of the Committee with Course Members. It was a unique opportunity for the Course to meet parliamentarians and discuss the policy options chosen by Germany.

Germany showed a great sense of hospitality and offered a high level of discussion throughout the day. The participants are very thankful to the Course’s German hosts for this unique and outstanding exchange and the learning opportunity thus afforded.