After Berlin, Senior Course 131 continued its Field Study to the United Kingdom. In London, the Senior Course was welcomed by Mr Nick Gurr, Director International Security Policy at the Ministry of Defence. 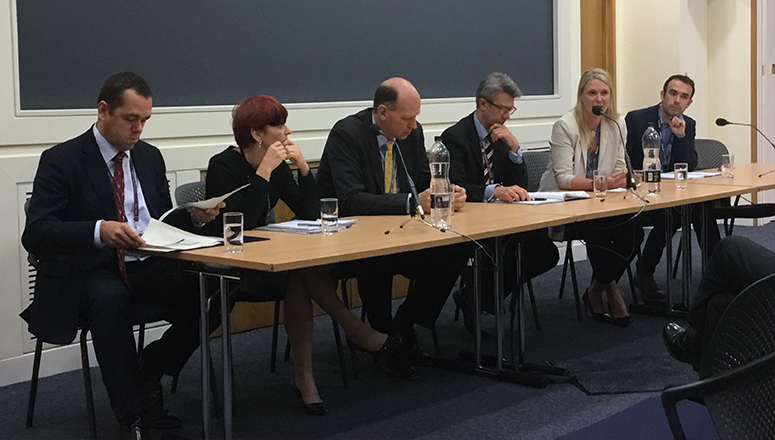 Following this introduction, Capt James Parkin, Assistant Head Defence Strategy and Priorities spoke about the UKâs global outlook and defence policy. He started his presentation by describing the UKâs position in the world and its interests which are threatened by four types of threat: terrorism, hybrid warfare, cyber and instability in the international order. He described in detail how the UK develops its defence policy, from the objectives, to the necessary responses and structure of its Joint Forces. He concluded with examples of the current topics discussed in the UK, such as organizational reform, and the contribution of defence to prosperity and productivity. He then gave the floor to Mrs Lisa Chesney, Deputy Head of the Security Policy Department at the Foreign and Commonwealth Office. She described the importance of close national and international co-operation for the United Kingdom in the current strategic context. Taking many factors into account in her analysis, she qualified the situation as a âflattening of powersâ, especially due to states now having less control than before, given the rise of non-state actors. This leads to complex relations between states and the growing need for cooperation between members and partners.

She was followed by Mr Giles Ahern, Head of Euro-Atlantic Policy. At the beginning of his presentation, he spoke about NATOâs most important concerns, and the European Union, highlighting the subject of European Defence. He also analyzed NATO-EU relations in accordance with the different threats and challenges. He briefly spoke about UK membership of the OSCE and the UN and the UKâs position on current issues.

A very dynamic briefing was provided by Mrs Valerie Evans, Head of the International Relations Group, who explained the changes in procurement policy and the acquisition cycle and gave examples on Joint Forces 2025. She underlined the importance of a competitive, efficient and innovative European Defence and Technological Industrial base to ensure the security of supply and the further development of planned capabilities. Finally, Mr Derek Breslin from the Department for International Development spoke about the activities of the United Kingdom in Development (UKAid). He explained how conflicts are getting more complex and the consequences on development. In the last part of his speech, he described how strengthening resilience also contributes to the prevention of conflicts.

The high level and frank session provided by the United Kingdom was very well articulated, showing a strong degree of consistency in the UKâs security policy. Course Members were able to assess all European and global security issues from a UK perspective.