SC131 began the second week of its European Field Study in Paris. On Monday, in the impressive facilities of âLes Invalidesâ, Course Members received a series of briefings about the French Armed Forces and their relations with NATO. The session was moderated by Navy Captain Paul Gelly, the French representative at the College. 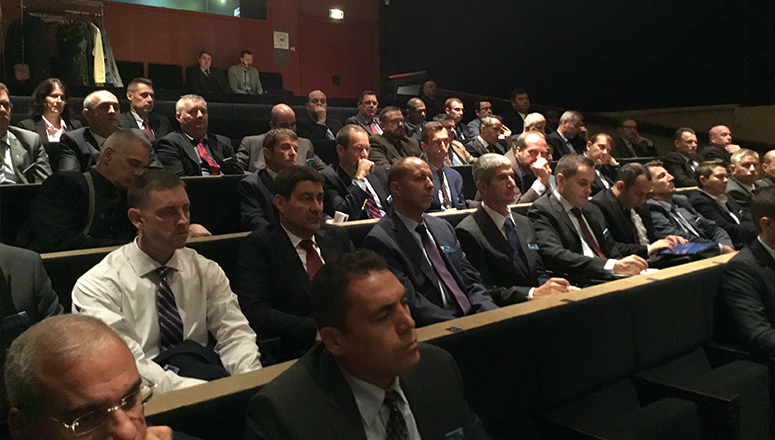 The course was welcomed by Vice-Admiral Denys de Bonaventure, Head of the Directorate General for International Relations and Strategy (DGRIS). He underlined the role of the NDC in strategic-level education at the beginning of his address and spoke about the different threats and challenges for Europe, with particular reference to terrorism, Islamic State and failed states. He mentioned different examples like Syria and various states in Central Africa and the Horn of Africa. He underlined the role of international institutions, especially NATO, and the essential role of the Armed Forces in this context.

Mr Olivier Sueur, Director Multilateral Action in DGRIS, then took the floor and spoke about France-NATO relations. He started with a historical perspective, continuing with the current state of relations, especially within the military structure. He offered some views on major current priorities for NATO, like Enhanced Forward Presence, underlining Franceâs support for it. He also shared his views on NATO-EU relations. He was followed by Col Chambaz, Head of the Armed Forces Staffâs NATO Office, who illustrated from a Joint Forces point of view the different operations France is leading or participating in worldwide, as well as domestic commitments. He showed very well, for example, how France is present in Africa and in the Middle East but also at sea in different areas around Africa, in the Mediterranean, the Black Sea and, further afield, the Baltic Sea. He also mentioned, when appropriate, the historical links with the regions concerned, which are important and which explain in some cases the involvement of the French Armed Forces. His talk included a brief account of Franceâs involvement in NATO operations, for example Enhanced Forward Presence. Both Mr Sueur and Colonel Chambaz afterwards answered Course Membersâ questions.

Later, there was a briefing from the Ministry of Foreign Affairs. Mr EscudiÃ©, Head of the Department for Strategic Affairs and Cybersecurity in the MoFA, presented Defence and Security policy from a political point of view. He analyzed the short-term (e.g., ongoing conflicts) to long-term (e.g., global warming) challenges and explained the resulting political priorities. This threw light on why the G5 Sahel project, for example, is strongly supported by France as part of the high-priority fight against terrorism. The speaker underlined that Franceâs commitment to NATO is fully compatible with the preservation of the country's decision-making autonomy and freedom of action, and repeated that Franceâs defence and national security strategy cannot be conceived outside the framework of NATO and its engagement in the European Union. He also clarified that the establishment of a partnership with NATO does not automatically imply a security guarantee. After his presentation, the speaker answered many questions.

The briefings were very useful to understand not only the strategic priorities of France, but also the reasons behind them. The discussion also helped Course Members understand the reasons for Franceâs extensive involvement in Africa and various other parts of the world.