The sixth and final stop on SC131âs European Security Perspectives Field Study was Portugal. The group was welcomed to Lisbon by Prof Dr Isabel Nunes from the National Defence Institute. In her welcome address, she talked about the importance of educational institutions to better understand the worldâs security challenges. She underlined the role of the NATO Defense College in this regard. Col Manuel Rosa, the Portuguese Faculty Adviser at the NDC, moderated the debates. 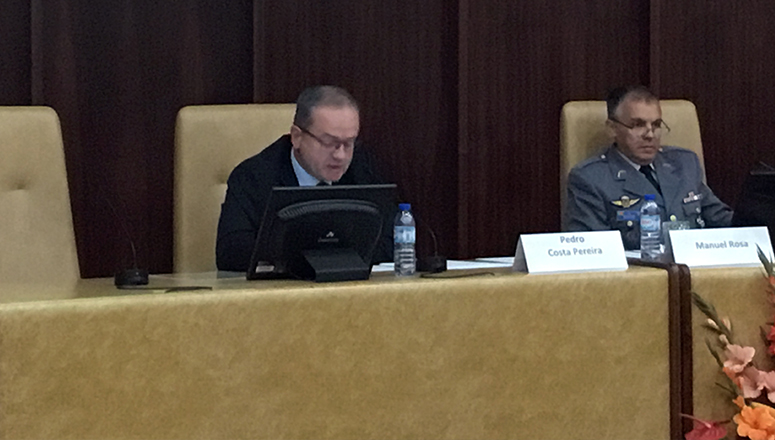 At the National Defence Institute, Course Members received a first briefing from Ambassador Pedro Costa Pereira, Director General for Foreign Policy in the Ministry of Foreign Affairs, about Portugalâs security policy. After a historical overview of Portuguese foreign policy, he talked about the countryâs main regional spheres of interest: Europe, the Atlantic and the Portuguese-speaking world. He related each of these to national security perspectives, using economic, financial, military, cultural and other factors to describe the Portuguese understanding of security. He insisted on the principles of subsidiarity, complementarity and solidarity, which are fundamental in the Portuguese approach. Dr Alvaro Matias, Director General for Economic Policy in the Ministry of Finance, then took the floor for a presentation about the sustainable recovery of the Portuguese economy. He demonstrated its continuous growth since 2012, and the improvement of employment (with a fall in unemployment from 18% in 2013 to less than 9% in 2017). This, coupled with low inflation (around 1-1.5%) in the last years, shows clearly the successful recovery of the Portuguese economy. This could be also demonstrated another way: he explained that the European Unionâs excessive deficit procedure was closed in 2017 because Portugalâs annual deficit was under the 3% limit. Both speakers answered questions after their presentations.

The second session was dedicated to National Defence Policies. MG AntÃ³nio Martins Pereira, Chief of Staff to the Minister of Defence, took the floor to explain democratic political control of the Armed Forces. After a historical review, he explained the current geopolitical context for Portugal. This was useful to understand the legal framework for the defence institutions in Portugal (Law of National Defence): this document furnishes all the necessary objectives and priorities for the Armed Forces. He also explained the role of the political institutions in relation to the Armed Forces. In his presentation, MG Pereira also described Scenario-Based Strategic Planning for National Defence, from the strategic concept to detailed force structures, and also gave explanations about the organization of the Ministry of Defence. He concluded by underlining the modernity of the Armed Forces concept and the importance of defence for the population.

The last speaker was MG Tiago Vasconcelos, Chief Joint Staff, who spoke about the Portuguese Armed Forces. At the beginning of his presentation, he gave explanations about resources (personnel and finance). In this regard, he underlined that Portugal stays committed to NATOâs 2% GDP spending rule and is on its way to achieving this from 2020 on. He also illustrated future procurement programmes. In another part of his presentation he explained the challenges for the Armed Forces and their missions, and also spoke about current operational commitments within coalitions and international organizations. He ended his presentation by talking about current and future NATO organizations in Portugal. Both MG Martins Pereira and MG Vasconcelos answered questions after their presentations.

Course Members really enjoyed this last part of the Field Study, which consolidated their knowledge about the security and defence policy of Portugal. More generally, during the entire Field Study, they were able to note differences in the security approach of the countries visited, but were appreciated each countryâs strong commitment to NATO and the role NATO plays in their security policy. Course Members had ample opportunity to speak with national experts and establish useful contacts for their work at the NDC and in their future career.