The President of Georgia visits the NATO Defense College

On Tuesday 17 October, the NATO Defense College was honoured to host the President of Georgia, H.E. Giorgi Margvelashvili. 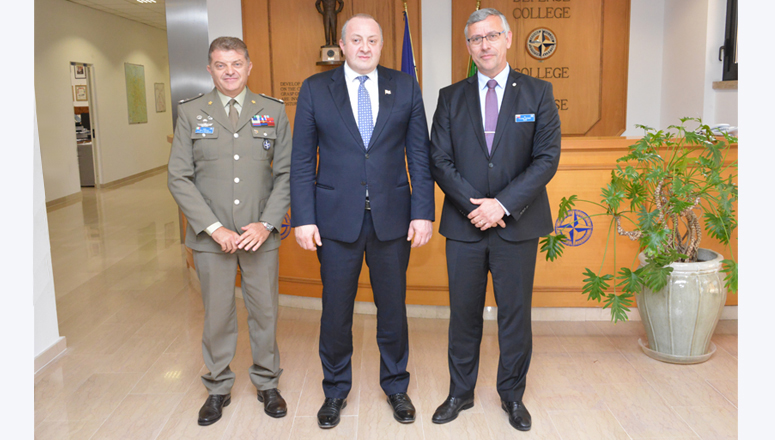 The President and his delegation, accompanied by the Italian Ambassador to Georgia, H.E. Antonio Enrico Bartoli, were warmly welcomed by the NDC Dean and Acting Commandant BrigGen (ret.) František Mičánek, the Director of Management BrigGen Mario Ramponi (ITA A) and other members of the NDC command group.

During his morning visit, the President gave a lecture in the Maynard-Thorn Auditorium entitled “The Euro-Atlantic aspirations of Georgia”. In his speech, the President stated that: “Georgia has been a committed believer in the goals that have been shaping the Alliance for decades.” He added: “Georgia is an example of a non-NATO member country increasing its stability through investments in security and developments, while at the same time participating in global security commitments […] We invest in stability, we invest in security, we invest in our efforts of bringing security to our region.”

The lecture, which was followed by an excellent Q&A period, was attended by Ambassadors and high-level guests, as well as by SC 131 and College staff.

Giorgi Margvelashvili graduated in Philosophical Studies from the Tbilisi State University in 1992 and continued his studies until 1998, when he obtained a Doctorate in Philosophy. He has been involved in politics since 2003, when he was a member of the then opposition party. He won the elections in 2012 with the coalition “Georgian Dream” and was appointed Minister of Education and Science. In February 2013, Giorgi Margvelashvili was appointed Vice Premier and, on 27 October of the same year, he became President of Georgia.