On Thursday 19th and Friday 20th October, the NATO Defense College hosted the 64th edition of the Anciensâ Annual Conference and Seminar. 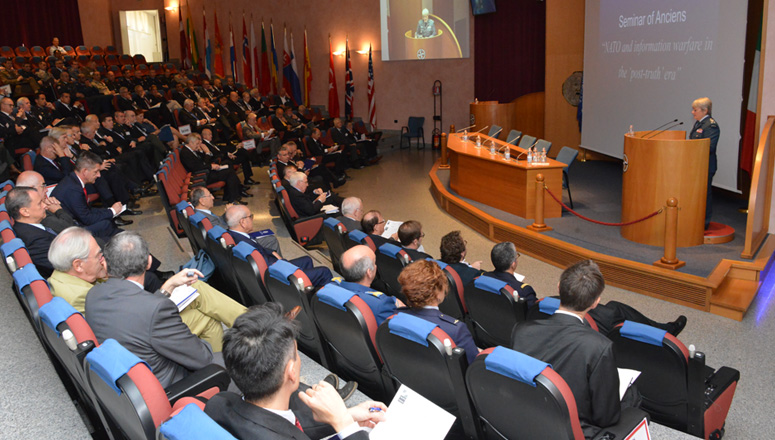 On Thursday 19th October, a reception for the 123 returning Anciens was held at the Italian Army Officersâ Club, at Castro Pretorio.

Next morning, the Secretaries of the various National Anciens’ Associations were at the College early for their annual meeting, chaired by the NDC Dean BrigGen (ret.) František Mičánek. This was followed by the keenly awaited Seminar, this year entitled “NATO and information warfare in the “post-truth” era”, which was held in the Maynard-Thorn Auditorium. The current Senior Course was also attending the event, along with the NDC command group and journalists.

All participants were warmly welcomed by NDC Commandant LtGen Chris Whitecross (CAN F), who is also President of the Anciensâ Association. The Commandant introduced the guest speakers of the event: Mr Matthew Fisher (CAN), Postmediaâs International Affairs columnist, who opened the Seminar with a keynote speech; Mr Keir Giles (GBR), Director of the UK-based Conflict Studies Research Centre; Mr Peter Pomerantsev (GBR), Journalist, author and TV producer; Dr Jamie Shea (GBR), NATO HQ Deputy Assistant Secretary General for Emerging Security Challenges; and Mr Nik Gowing (GBR), international broadcaster and Visiting Professor in War Studies at Kingâs College London, who acted as moderator for the Seminar. The Commandant underlined the importance of this yearâs chosen topic, in relation to the current instability in various parts of the world and the obvious interest of offering a forum for experienced Anciens to engage with future leaders on the many related challenges. âWhat is at stake in the post-truth era is our understanding of freedomâ, the Commandant added.

The invited speakers offered stimulating and informed perspectives on what is certainly one of the most challenging periods in recent years for the Alliance. In his keynote speech, Mr Fisher presented the new threats posed by information warfare, warning that âThe West is way behind its adversaries in the cyber fieldâ. He provided examples of the dangers posed by the manipulation of information, citing recent episodes on the Alliance's eastern flank. âIn this war we are losing because we are not fighting at all,â he cautioned. Mr Giles also identified the threats posed by information warfare, focusing in particular on social media and their ânew capability, able to deliver selected messages to a targeted audienceâ. He concluded by emphasizing the importance not only of awareness, but also of its dissemination. Mr Pomerantsev again underlined the scale of the threat: âToday there is no attempt to make lies look real anymore; in the internet echo chambers, the message will be delivered anyway.â Dr Shea touched upon the concept of resilience as the main prerequisite for guarding against potential vulnerabilities related to hybrid warfare.

This was followed by a plenary discussion among the speakers, moderated by Mr Gowing.

Friday afternoon was dedicated to the Annual General Meeting of the Anciensâ Association.

All the attending guests and speakers felt that the Conference and Seminar had further strengthened ties between the Anciens and the current NDC community, providing an excellent opportunity to share and discuss state-of-the-art analyses of the priorities facing NATO and its Partners.

This event has been organized every year since 1954, to bring together former NDC Course Members. At present, the Anciensâ Association has more than 7,000 members worldwide. The fact that many of them hold national or international positions of great responsibility reflects the high educational standards set by the College, and the excellent reputation it enjoys among Allied and Partner nations.

The Conference and Seminar not only afford Anciens an excellent opportunity to maintain contacts and friendships, but also offer them an authoritative update on issues which are currently relevant to NATO and to the international community at large.