The first round of visits by Senior Course 131 on Field Study 2 started in Brussels, where Course Members visited NATO Headquarters. They were welcomed by the Chairman of the Military Committee (CMC), Gen Petr Pavel. In his introductory speech, he focused on current and future challenges for NATO, and described them with reference to both state and non-state actors. Since no nation can cope with these challenges alone, NATO â as an Alliance of nations â and its partners play a fundamental role in dealing with them. Gen Pavel commented on some of the current discussions within NATO at the end of his presentation (mentioning, for example, the projection of stability, resilience and the financial aspects of defence). He dedicated an important part of his time to answering questions raised by the audience. The delegation, led by NDC Commandant LtGen Whitecross, was very grateful to him for having addressed the Senior Course as the first speaker of their Field Study. 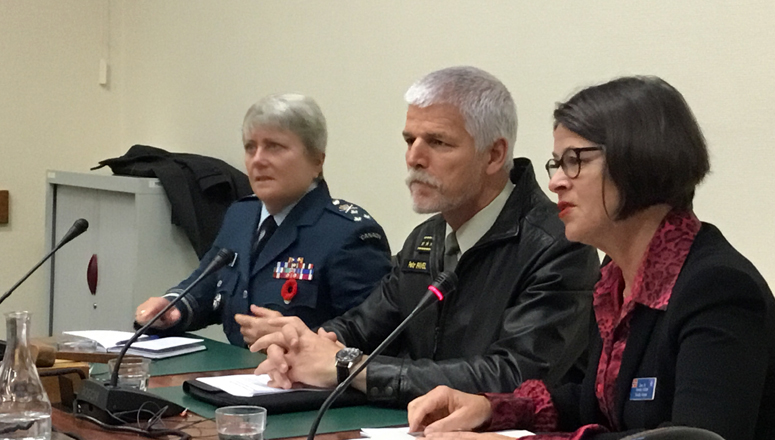 Continuing its visit at NATO HQ, the Senior Course received a series of briefings reflecting different views on âWhat keeps NATO awake at nightâ. The first panel comprised representatives of the International Staff. Dr Stephanie Babst, Head of Strategic Analysis Capacity, took the floor first and spoke about trends in the security environment. She described thought-provoking scenarios and initiated very interesting discussion on a number of questions. She insisted on the use of multiple factors to think about security and mentioned not only military factors but also economic, political and societal ones. Mr Gabriel Bernier followed and described the non-linearity of the current challenges. He explained their consequences for the decision-making process of the North Atlantic Council (NAC), with 29 members, and made particular reference to the Wales and Warsaw Summits. He also explained the real meaning of âimmediate responseâ and âprojecting stabilityâ, the logic behind these terms and the need for unambiguous decisions. The next panellist was Mr Metin Paksoy, a specialist on Russia, who used a historical point of view to explain current NATO-Russia relations and to describe NATOâs policy in this regard. He also spoke about the topics currently under discussion between NATO and Russia. The participants were very grateful for these high quality strategic briefings and for the following discussion.

At NATO HQ, the Senior Course was able to enjoy a second panel about âWhat keeps NATO awake at nightâ, this time at the political level. First, His Excellency Ambassador Claudio Bisogniero, Permanent Representative of Italy to NATO, gave his point of view. He described the different threats coming from different strategic directions and also mentioned where they overlap. He underlined the importance of NATOâs being favourably perceived by member state populations and the countries in contact with the threats. He also emphasized the role of partner countries and organizations in this regard. At the end of his presentation he also gave great emphasis to the unity and indivisibility of the Alliance. After this first presentation, Mr Tamil Waser, Political Adviser to the Permanent Representative of the United States, took the floor and discussed the elements that make NATO strong. He discussed in detail the political relations between members and partners and explained how these relations are a source of strength for NATO. The third panellist was Mr Barkin Kayaoglu, First Counsellor at the Turkish Mission to NATO. He described the different threats and challenges from a Turkish point of view. Interestingly, he chose to analyse these challenges against a backdrop of norms and order (or, better, lack of norms and order). He came rapidly to the conclusion that partnerships with nations and international organizations (especially the EU) and good political relations are necessary to face the challenges created by the affected regions.

This was a unique opportunity for Course Members to interact with the political side of NATO. The delegation is very grateful to the Italian Ambassador and the US and Turkish Advisers for their comments, and the time they dedicated to useful discussion.