After the visit to NATO HQ, the SC transferred to the European Commission building in the centre of Brussels. Commission Representative to the Political and Security Committee in the Council Mr Diego De Ojeda, from the Secretariat-General of the European Commission, welcomed the participants and took the floor for the first briefing. After a short historical perspective, he focused on NATO-EU cooperation and the 42 actions agreed between the two organizations. He spoke about the status of the cooperation and what has been achieved so far. He was very confident about the cooperation with NATO and even said there could be further EU proposals for common work in the future. During the discussion, moderated by NDC Faculty Adviser Spec. Dir. Annette Hurum, he gave some details about PESCO and other policy elements. 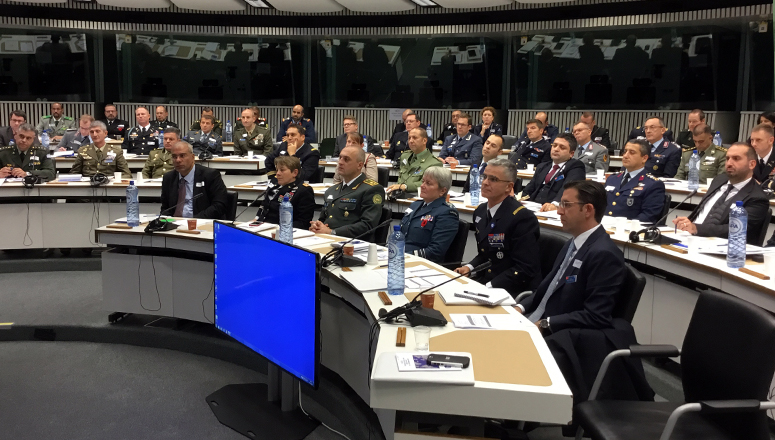 Ms Sylvia Hartleif, Foreign Affairs Team Leader in the European Political Strategy Centre (EPSC), then took the floor. In her introduction she spoke about cooperation with NATO, especially in the domain of strategic foresight and cooperation with ACT. She then focused on the EU and her particular activity. She mentioned particular concerns similar to those of NATO, for example cyber issues, but also differences. In this regard she spoke about Brexit and the future loss of an EU member state. At the end of the presentation she talked about the progress in European Defence, and the EUâs role as a global player.

The European Commission representatives completely fulfilled the expectations of Course Members. This visit was very useful for all participants, enabling them to understand the EU position in NATO-EU relations. As many of them are working on this topic in their research papers, it was an excellent opportunity to discuss many questions directly with subject matter specialists.