Continuing their Field Study II, and following the visits to NATO HQ and the EU Commission, SC 131 visited SHAPE in Mons on the morning of Wednesday 8 November. Course Members were welcomed by MGen Pedersen, Deputy Chief of Staff Military Partnership Directorate. The group was also able to enjoy in-depth briefings on enhanced Forward Presence by LTC Jarillo from the Comprehensive Crisis and Operations Management Center (CCOMC), on NATO since the crisis in Ukraine by BGen Ploughman, Assistant Chief of Staff J5 and on the role and capabilities of the CCOMC, by its Director, BGen De Quincey Adams. After the briefings, a discussion took place with all the speakers, chaired by MGen Pedersen and moderated by Col Bulka, Faculty Advisor at the NDC. 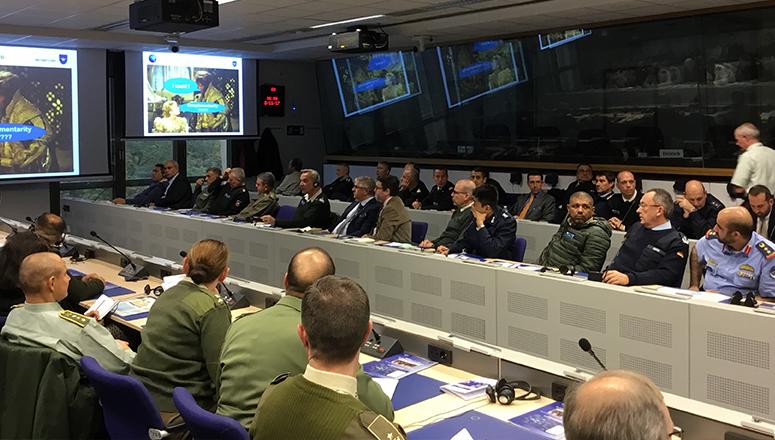 After the visit to SHAPE, the SC transferred to EUMS where its Director General, LtGen E. Pulkinnen spoke about the role of the EU Military Staff (EUMS) and gave some examples of actions in Africa. He also mentioned cooperation with NATO and other actors.

The first speaker, BGen H. Krieb described the different strategic orientations of the External Action Service of the EU and explained the different practices and actors in EU Crisis Management Institutions and their relationship. He spent some time explaining how the capability development process works in the EU and what the capability landscape looks like. At the end of his presentation, he talked about the consequences of Brexit and offered some possible solutions. In looking at the similarities and differences between NATO and the EU, Course Members were able to see the complementarity between the two organizations.

Later, Mr Paolo Bressan took the floor in order to explain the objective behind the Joint Declaration signed in July 2016 between NATO and the EU, and the status of its implementation. Although NATO-EU relations existed before the signature of this declaration, it was a crucial step forward. The declaration identified 8 domains and a total of 42 agreed concrete topics for pragmatic cooperation to be considered as actions in a process, with a periodic review of progress. To facilitate implementation a steering group has been created. Concrete results already exist, they were presented in the first progress report to the NAC/EU Council in June 17. The second report is in preparation and will be presented in December 2017, it will probably contain new Common proposals to be endorsed.

As one can imagine, decision making processes, initiatives, operations and NATO-EU relations were at the heart of the discussions over the 2 days.

The Commandant of the NDC would like to thank all those at NATO HQ, the EU Commission, SHAPE and the EUMS for the excellent briefings the Senior Course received. The opportunity to discuss directly on site with the highest representatives of these institutions gives real added value.

The Commandant also thanks the Belgian Government for the excellent support received during the NDC stay in the country. Everything went well and the accompanying staff showed not only great flexibility but was also very professional in every activity.