The next main stop on SC 131âs Transatlantic Link Field Study was Washington, D.C. After an interesting tour of the Pentagon and the United States Department of Defense, BGen Norman Cooling, Legislative Assistant to the Commandant of the Marine Corps and Ancien of the NDC, welcomed the Senior Course in the Rosenthal Theater of the Joint Base Myer-Henderson Hall. He briefed the Course Members about the role of the Office of Legislative Affairs. This office coordinates with all Marine Corps agencies to inform Congress, respond to Congressional inquiries and ensure that the Marine Corps have the appropriate authority and are sufficiently resourced. He talked about the political situation in the 115th Congress and the current Congressional environment (he mentioned, for example, tax cuts and expense control) and explained the consequences for the Armed Forces. He also discussed the legislative process and the role of the different committees in the Congress. He ended his briefing with lessons learned on the relationship between politics and the military. 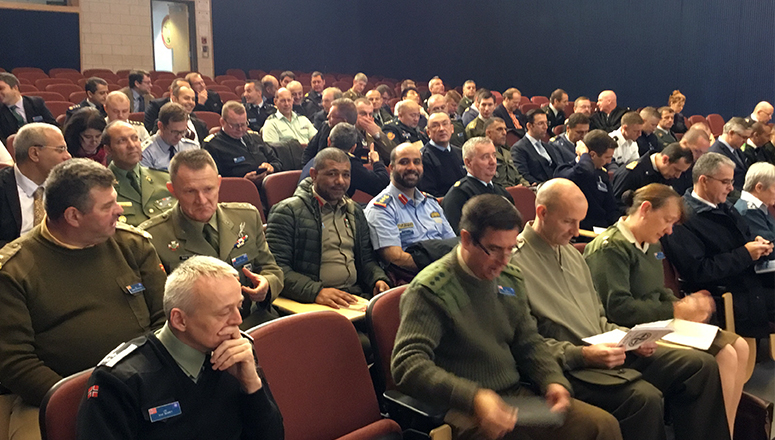 MGen Glen VanHeck, Vice Director for Strategy, Plans and Policy in the Joint Staff (J5), then took the floor and talked about the interagency process. He described the upper level structures and processes of the US Defense and Military and explained how the National Security Council (NSC) as a senior interagency forum for national security policy issues works, including its different committees. He also explained the structure of the Joint Staff and how the interaction with NATO works. He then moved on to some current security policy topics like NATO deterrence and defence. He also talked about challenging regions in the world and the US position on the related issues.

For their final activity in Fort Myer, Course Members were honoured to receive a briefing followed by a discussion with Gen Robert B. Neller, Commandant of the United States Marine Corps (USMC) and Ancien of the NDC. He described the USMC mission and core competencies and the current and future employment of the Marine Corps. He described the drivers of change (complex terrain, contested domains, technology, information, etc.) and the necessary capabilities for the future: cyber, information environment operations, electronic warfare, robotics (manned/unmanned teaming) and others. To conclude, he offered Course Members some thoughts on readiness, deployment tempo, change, technology/modernization and people for the future. Like the previous speakers, he was willing to answer questions about the US perspective on topics that were discussed earlier in the Course.

LtGen Whitecross thanked General Neller for his presentation and offered him the crest of the NDC as a token of appreciation. The Course Members greatly enjoyed the morningâs programme, especially being offered the opportunity to discuss current priorities with top-level officers dealing with policy on a daily basis and willing to share their experience.

SC 131 moved to the Capitol building on the afternoon of Nov 13. Following a guided tour of the building, Course Members were briefed by Mr. Magnus Nordenman from the Atlantic Council, a major think tank in Washington.

He presented the different activities of the think tank, which is very policy-oriented. After a short historical overview, he presented the NATO topics the Atlantic Council is dealing with. He mentioned the currrrent focus on the maritime role of NATO, possible future changes in structure, the role of NATO in counter-terrorism and the future of defence and deterrence.

He explained burden sharing and other issues with a âcontinuityâ approach, giving some examples from the preceding administrations in relation to the same topics.

At the end of his presentation he Course Membersâ questions about future relations with Russia and possible areas of cooperation.