On 14th November, before leaving Washington, Senior Course 131 moved to the International Monetary Fund Headquarters and had the opportunity to hear complementary briefings. 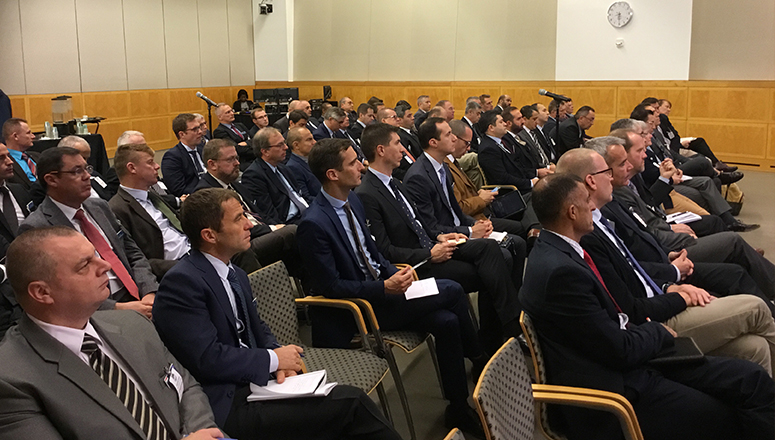 The first briefing was given by Maj James E. Fagan, Chief of State Defense Integration, Bureau of Political-Military Affairs at the State Department. He explained the structure and the role of the State Department and showed clearly the differences with the Defense Department, which has different approaches, roles and budgets. As security affairs involve both Departments, full coordination and exchange is necessary; for example, the National Defense Strategy in the Department of Defense (DoD) and the Joint Strategic Plan in the State Department should be in line with the National Security Strategy given by the President. Other important areas of coordination are regional issues and the different structures in both Departments (the Commands in the DoD, and the embassies and regional bureaus in the State Department). After the briefing, there were discussions with Course Members on issues related to strategic guidance and its implementation by State and Defense Departments, the role of the US in the Security Council or the global leadership of the United States.

This briefing was very useful for the Course Members to fully understand the strategic orientations of the United States and their military and diplomatic components.

Again at the IMF, Course Members enjoyed two briefings about the well known Bretton Woods institutions. Mrs Angelica Silvero, Head of the Speakers Bureau of the World Bank Group took the floor to illustrate the role of the World Bank, describing the evolution of the organization over the last sixty years and giving details on how it works with governments (financing projects, for example) or with the private sector (helping to establish companies in Africa, for example). She explained the borrowing processes to support country development, showed how the 189 members of the World Bank work together through the Board of Governors and how the Board takes decisions to reach the âtwin goalsâ of the World Bank: to end extreme poverty and boost shared prosperity by 2030. In particular, World Bank efforts are concentrated in sub-Saharan Africa and South Asia. Development support projects of the World Bank are not only related to poverty but cover development domains like early childhood, climate or gender equality. The World Bank is also active in the area of fragility and conflict, supporting projects related to refugees for example. Course Members were particularly interested to learn how the World Bank helps to establish resilience - a topic that is very much discussed in NATO. They were also interested in the alignment of the World Bank with the UN objectives (the seventeen targets replacing the Millennium goals).

The next briefing was supplied by Mr Patrick Cirillo, Principal Assistant to the Secretary of the International Monetary Fund (IMF). He focused on the IMF, explaining its origins and what it is today: a Bretton Woods organization, like the World Bank, and a global organization with 189 members. He described the different roles of the IMF: surveillance of the global economy and intervention to stabilize it if necessary, lending money where immediately necessary and in certain conditions, and supporting capacity development. These roles were likened to being a âdoctorâ, a âfirefighterâ and a âteacherâ for the global economy, by working in close cooperation with other organizations. IMF resources come from the Members as âmembership quotasâ, determined by their ranking in the global economy. In the speakerâs opinion, there is some good news: the global economy has gained in stability and a 3.6% growth is expected for 2017. But there are some short term risks and structural challenges â for example, inequality between countries, rising sovereign and corporate debt, productivity growth being too low and some issues with European banks.

This part of the second day of the visit to Washington was again a success, helping Course Members to better understand the diplomatic and economic environment around defence activities, and giving them an overview of the Bretton Woods system and its organizations which contribute to global security.

The last briefing of the morning at the IMF was given by a spokesperson from the Inter-American College in Washington. Dr Roberto Pereyra BordÃ³n, Senior Professor & Faculty Coordinator gave a presentation about âA perspective on Latin Americaâ.

Dr BordÃ³n started his presentation by describing the security environment in Latin America. He explained that since 2003 the Security environment has become multidimensional. He gave Course Members different models to explain the relationship between Defence and Security in the different Central- and South-American countries. Dr BordÃ³n commented the situation in some countries like Venezuela and Brazil. He also spent some time discussing Colombia and the challenges the country is facing following the agreement between the Government and the FARC. In fact, his message was clearly that there is no clear definition of Defence and Security in Latin America.

In the second part of his presentation, Dr BordÃ³n explained the different security challenges in the region. He mentioned criminality and drug trafficking but also the very important private security services that compete with the public police forces. He also explained that poverty and inequality play a very important role in the development of insecurity in the region: Latin America is a very unequal region.

In the last part of his presentation he described the intercontinental relations of Latin America and the role of China in military equipment acquisition, the role of BRICS (with the creation of the Contingent Reserve Agreement) in a kind of competition with the IMF and the role of Iran in Nicaragua in particular.

This presentation offered a supplementary perspective on the American Continent and was very complementary to the briefings focusing on North-America and the Bretton Woods institutions, showing Course Members that the understanding of Security and Defence can be very different in different countries.

In the afternoon, SC131 moved to the Woodrow Wilson Center to hear two further briefings.

First, Mr Roger Mark De Souza, Director of Population, Environmental Security and Resilience welcomed participants and explained what the Center does. The Wilson Center is an independent international center for scholars, which facilitates dialogue between research, policy and practice communities. The Center has been ranked #1 trans-disciplinary think tank in the world. It has many different programmes, for example the Environmental change & Security programme. Mr De Souza used the Global Sustainability and Resilience programme to illustrate the kind of methods used for analysis and the network used to get the necessary information, but also to distribute the research results. For example, the Center looks at the relationship between food prices and climate change, food security and conflict, water and security etc... The results allow the Center to make recommendations to policy makers (in Foreign policy for example) and explain some aspects of security development.

The second speaker took the floor to talk about National Security and Climate Change. Mrs Sherri Goodman, Senior Fellow at the Wilson Center explained the different consequences of climate change. Using short video sequences she showed what the risks are for military bases but also for human health and economic competitiveness for example. She developed her thoughts on energy demand, explaining it in relation to climate change and showed how research could shape energy policies in the future. In her conclusions she mentioned predictive capacity (forecasts) as being critical for the future.

Both speakers answered questions and continued discussions with Course Members. These multidisciplinary briefings are very important; they contribute to a real multidimensional understanding of the security environment and are excellent examples of strategic thinking in the 21st century. This is what the NDC tries to offer to Members of the Senior Course.