Gen Denis Mercier, Supreme Allied Commander Transformation, welcomed Senior Course 131 to Allied Command in Norfolk. In his introduction he gave his views on the evolution of the security environment since the Cold War and spent some time explaining the different roles of the Strategic Commands. He gave a holistic vision of ACT as an operational command preparing the Alliance for future warfare. He then gave the floor to ACT Chief of Staff (COS), Air Marshal Sir Graham Stacey who explained the role of NATO in the 21st century and its Command and Control structure. He focused on the âraison dâÃªtreâ of NATO and spoke about the use of technologies âin order toâ better apprehend the complexity of the security environment and described the importance of partnerships (with countries, but also with organizations and companies). 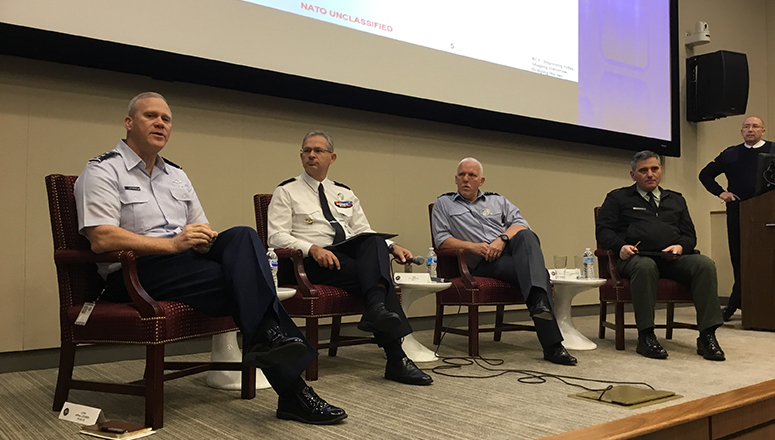 Following these two high level presentations, Gen Mercier (SACT), Air Marshal Sir Stacey (COS), LtGen Lofgren, (Deputy Chief of Staff for Capability Development), and BGen Tsouganatos (Assistant Chief of Staff for Joint Education, Training and Exercises) answered questions from participants. The discussion was moderated by Navy Captain Altmeier, Faculty Advisor at the NDC. During the debate, Gen Mercier explained the relationship between the Strategic Foresight Analysis (SFA) which looks at trends for the next 20-30 years that could lead to conflicts and the Framework for Future Allied Operations (FFAO), which gives guidance for the development of capabilities. Both these two Strategic documents are established by ACT and are extremely important for the Alliance and its members.

Later, Course Members received briefings on specific topics. Col Karsten Jensen from Denmark spoke about NDPP (NATO Defence Planning Process) and capability development. He explained how political guidance is based on the SFA and FFAO documents, how the requirements are determined and the objectives set. He spoke briefly about the implementation of the capabilities by nations. He explained the âconsensus minus oneâ decision making process which is particular to NDPP. Following him, LtCol Herman Maes from the UK spoke about Projecting Stability. He defined the terms and showed clear complementarity between âProjecting Stabilityâ and âDeterrence and Defenceâ in relation to NATOâs core tasks. The last speaker was Col Sean Killeen who spoke about exercises and training. He explained the role of ACT in NATO exercises and how the NATO Exercise Programme Review (NEPR) works.

In the afternoon, the Senior Course split into four working groups organized around the topics of the Study projects. These working groups met with ACT specialists and had the opportunity to ask questions. This opportunity was very much appreciated by Course Members.

The trip to Norfolk was again very useful to better understand the transformation processes of NATO and how they are established, led and implemented. The briefings were very complementary to the lectures held in Rome during the study Period dedicated to NATO.