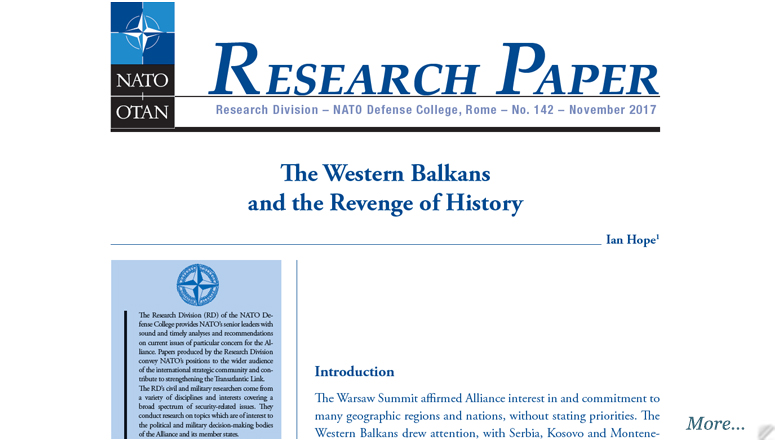 The latest research paper by the Research Division of the NATO Defense College argues that as NATO begins to seriously debate possible missions for âprojecting stabilityâ outside of its traditional Article 5 boundaries, with a special focus on the Middle East-North Africa (MENA) region, it might be wise to first consider doing so where proximity demands immediacy of action with sizeable projection: the Western Balkans.

According to the author, projected stability in the Western Balkans, including the possible deployment of NATOâs Very High Readiness Joint Task Force (VJTF) and follow-on forces as an effective de-escalatory and confidence-building mechanism, should be a specific strategic option for NATO, and a part of NATO operational planning.

The author, a career officer in the Canadian National Forces, is currently serving as Senior Researcher in the NDC Research Division. Colonel Hope has had multiple combat deployments, including Kosovo, Afghanistan, and other hot spots. With a PhD in military history, he has the ideal background to assess NATOâs responsibilities and future requirements in the Western Balkans.

We hope you enjoy this paper.
Regards,