Upon arrival in Brussels, Senior Course 132 visited the European Commission. 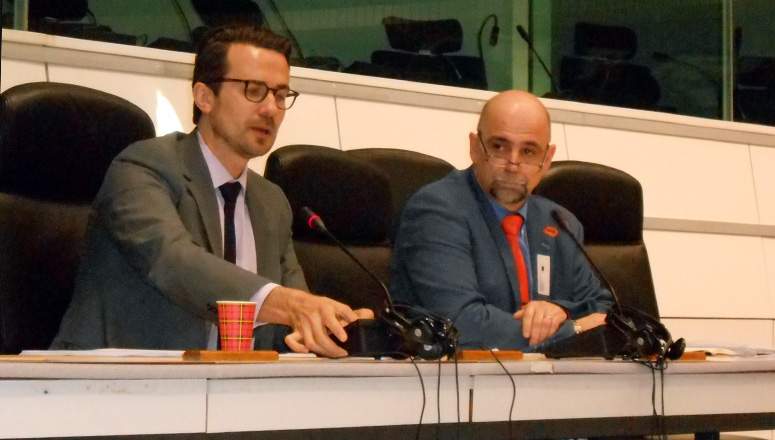 Dr Bart Szewczyk, from the European Political Strategy Centre (EPSC) foreign affairs team, welcomed the group. In his introduction, his spoke about the various crises affecting Europe in recent years â Russia's annexation of Crimea, Brexit, but also the new challenge of China (and not only in the economic domain). He answered an impressive array of questions afterwards.

The representative of the EC Secretariat-General on the European Council Political and Security Committee, Mr Diego de Ojeda, then took the floor. After providing a brief overview of recent events, he focused on PESCO. Looking at NATO-EU cooperation and the various actions this has entailed, he spoke about the status of cooperation, listing achievements to date and insisting on EU participation in the NATO CMX exercise. He confidently anticipates further EU proposals and cooperation. During the discussion, moderated by the NDCâs Swiss Faculty Adviser Colonel Currit, the speaker gave further details of a very practical nature about the CSDP initiative and other policy elements.

Mr Nicolas Bessot, Policy Coordinator at the Secretariat of the Security Union Task Force, concluded as the third panellist. He works in the Directorate for Migration and Home Affairs. Without releasing member States from their duties, the EU endeavours to ensure a high level of security through measures that aim to prevent and combat crime. This implies coordination and cooperation between police and judicial authorities. He emphasized the intensification of activities since 2015 (five years after the Treaty of Lisbon). A lot has been done in prevention, in prosecution and in protection, including measures against organized crime and cybercrime.

In the coming years, alongside interoperability of IT systems and improvement of legislation, NATO-EU cooperation is the priority.