On the second day in Brussels, Senior Course 132 received briefings from NATO HQ. Because of the ongoing move to new premises, the briefings were held at the Belgian MoD. 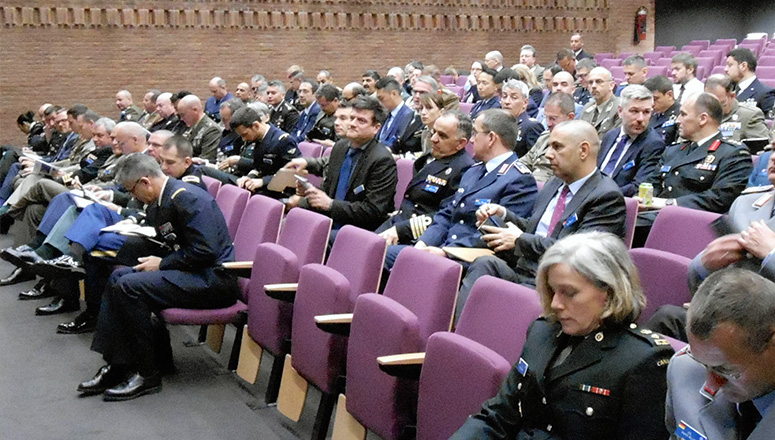 The Senior Course was welcomed by the Chairman of the Military Committee (CMC), Gen. Petr Pavel. In his introductory speech, he focused on current and future challenges for NATO, and described them with reference to both state and non-state actors. Since no nation can cope with these challenges alone, NATO â as an Alliance of nations â and its partners play a fundamental role in dealing with them. The speaker used the word âcohesionâ as a golden thread for his presentation and commented on some of the current discussions within NATO. He talked about projecting stability, burden sharing and the financial aspects of defence. At the end of his presentation, he mentioned the three âCâs of the future summit in Brussels: âCash, Capabilities and Contributionsâ. He dedicated considerable time to answering Course Membersâ questions. The delegation, led by NDC Director of Academic Operations (DAO) BG D. Pincet, was very grateful to him for having addressed the Senior Course.

The second briefing was delivered by Mr Marc DiPaolo, Head Operations and Missions Section. He spoke about future operations and used the innovation perspective to better understand what they will look like and how to approach them. He spoke about elements of unpredictability, the disruptive aspect of different threats (e.g., conventional, hybrid, terrorism, cyber, counterspace) and the importance of decision-making. This was a very interesting briefing, which helped the participants to better understand and measure the role and importance of technology.

After a short coffee break, Dr Jamie Shea, Deputy Assistant Secretary General, Emerging Security Challenges Division took the floor. He used the cyber issue to explain the vulnerabilities of our societies and how to develop answers to the emerging threats. In this regard he displayed the respective roles of the intelligence community, the private sector and governments, and explained how capabilities can be developed, especially using networking and partnerships.

The SC then received a briefing from Mrs Carmen Romero, Deputy Assistant Secretary General, Public Diplomacy Division. She explained the public communication of NATO and its strategic importance. Since 2014, NATO communications have drastically evolved, internally as well as externally, and are now completely integrated into policy making. She also explained how communications are planned (campaigns) and evaluated in terms of impact. At the end of her briefing she talked about disinformation and propaganda, explaining what NATO is doing to counter the use of these activities to create confusion, misunderstandings and to undermine trust.

The last briefing was given by Ms Clare Hutchinson, Secretary Generalâs Special Representative for Women, Peace and Security. She explained how womenâs empowerment can help to develop a peaceful and secure environment, and showed clearly that engaging communities of women helps to improve security. She also showed how human trafficking impacts security in our countries.

This was a unique opportunity for Course Members to interact with the CMC and representatives of the International Staff. The Senior Course is grateful to all the speakers for their briefings and the time they dedicated to useful discussion.

After the briefings at NATO HQ, the SC transferred to EUMS where BGen Heinz Krieb from the Concepts and Capability directorate welcomed participants. As first speaker, he described the different strategic orientations of the External Action Service of the EU and explained the concept of âstrategic autonomyâ. Examining different possible scenarios, he spent some time explaining how the capability development process works in the EU (PESCO: Permanent Structured Cooperation), and what the capability landscape looks like. He also talked about NATO-EU cooperation. At the end of his presentation, he discussed the consequences of Brexit and offered some possible solutions. In looking at the similarities and differences between NATO and the EU, Course Members were able to see the complementarity between the two organizations.

Later, after a coffee break, Mr Andras Kos from the Crisis Management and Planning Directorate of the EUMS, took the floor to explain the purpose of the Joint Declaration signed in July 2016 between NATO and the EU, and the status of its implementation. Although NATO-EU relations existed before the signature of the declaration, it was a crucial step forward. The declaration identifies areas and agreed concrete topics for practical cooperation, to be considered as a process with a periodic review of progress. To facilitate implementation a steering group has been created. Concrete results already exist, they were presented in the first progress report to the NAC/EU Council in June 2017. The second report was presented in December 2017, with new proposals for cooperation (total of 74 so far) and a third one is in preparation.

From the Operations Directorate, Col A. Wilson from the EUMS Operations Division presented the EUâs different military missions. He identified the challenges and the way ahead for the most important missions, for example the European Force ALTHEA and the different missions in the Horn of Africa, such as the training mission in Somalia.

Decision making processes, initiatives, operations and NATO-EU relations were at the heart of discussions throughout the day and were a very valuable complement, for SC Members and staff alike, to the presentations already heard in Rome.