After a long flight over the Atlantic, SC 132 landed in Montreal and travelled to the Canadian capital Ottawa. The NDC delegation was welcomed by MG Derek Joyce, Director of General International Security Policy, in the facilities of Global Affairs Canada. During the day, dedicated to Canadian security policy, the discussion was moderated by Col Ian Hope, Canadian Faculty Adviser at the NDC. 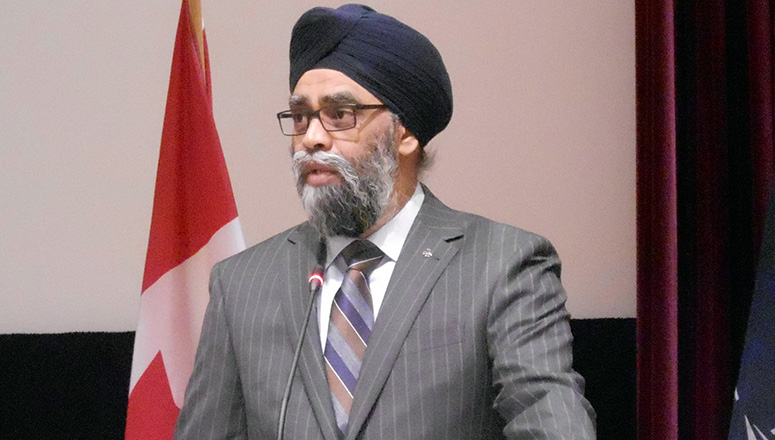 The first briefing was delivered by Mr Peter Hammershmidt, Assistant Deputy Minister Policy, who spoke about the Canadian strategic setting. He described how Canada is integrated in the international security environment, highlighting the differences with the United States and Europe. He also spoke about the importance of NATO for Canada, and explained the countryâs current challenges. He based his presentation on Canadaâs âStrong, Secure, Engagedâ defence policy, published in June 2017. He then answered questions: Course Members were interested in the Canadian views on the northern waterways, which are also a European concern.

Following Mr Hammerschmitt, the senior Course had the opportunity to listen to the Minister of National Defence and Member of Parliament, the Honourable Harjit Singh Sajjan. He spoke about the importance of NATO for Canada, underlining Canadian participation in enhanced forward presence in Europe and the increase in related budget allocations. He dedicated most of his time with the SC to answering questions from, and interacting with, the Course Members.

After a coffee break, the SC had the truly unique opportunity of an address from Gen John Vance, Chief of Defence Staff. He stated that, while the use of force is still important, it is no longer sufficient to solve current international problems. Upholding the need for international norms and legitimized international bodies, he underlined the importance of the âtrain, equip, advise and assistâ framework together with international organizations. He then spoke of the main theatres of operations for Canadian Armed Forces, and the very different types of activities and challenges they represent. He then offered to answer questions from Course Members, who made good use of the time.

To cover the topic of Canadian Armed Forces Operations, BG L. Bourgon, Director General Operations, presented domestic and continental operations as well as expeditionary operations. Covering an operationalized view of the security policy presented earlier, she talked about various theatres and types of operations so that the Course Members could understand the diversity of the Canadian Armed Forcesâ activities, especially in the Northern part of the country. She also dedicated some time to explaining NORAD (North American Aerospace Defence Command), the result of an agreement between Canada and the United States for aerospace warning and control as well as for maritime warning.

In the afternoon, RAdm Santarpia, Director General Plans in the Strategic Joint Staff, talked about Canadian forces and priorities. He showed very well how cooperation with other nations (or in the framework of international organizations) works in the field, and how this relates to strategic goals and interests in defence policy. After a Q&A session and a coffee break, Mr. Richard Arbeiter took the floor as the last speaker of the day. As Director of the International Security Policy Bureau in Global Affairs Canada, he brought a different perspective on policy. Giving the Foreign Affairs view, he spoke about the role of NATO for Canada, NATOâs open door policy and Canadaâs position on the possible accession of new members, but recognized that consensus will not be easy to reach. He also discussed the role of women in the Armed Forces, and in peace and security in general. He opened the floor for questions at the end of his presentation, where Course Members showed interest in Canadaâs immigration and integration policy.

During this visit, Canada showed the dynamism of its Armed Forces, engaged in a pragmatic approach to coping with current and future challenges and strongly committed to NATO. The staff and Course Members participating in this visit are very thankful to the Canadian National Defence Minister, the CHOD and the Headquarters for the opportunities to meet with the highest representatives of Canadian Defence, the excellent organization of the day, the fruitful briefings and the open and frank discussions.