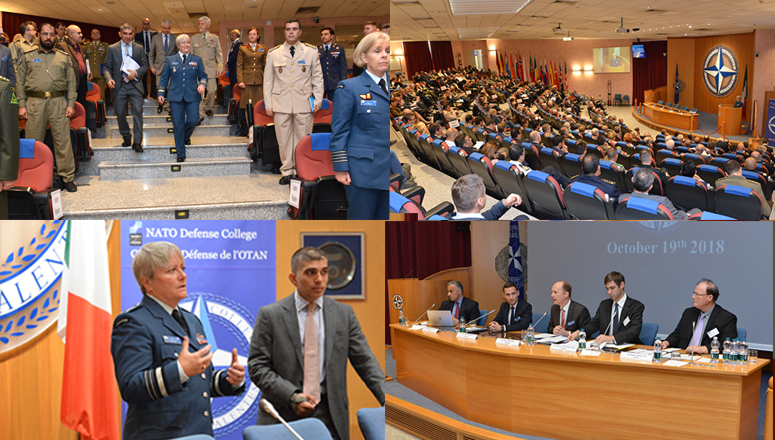 Membership of the Anciensâ Association has continued to grow over the years, and the Conference and Seminar has become an increasingly important event: hosted at the NDC since 1954, it enables Anciens to keep up friendships made while at the NDC and receive an update on current issues of concern to NATO.

Anciens and the NDC Command group met on Thursday evening for the reception at the Italian Navy Officersâ Club in Rome. On Friday morning, the Secretaries of the various National Anciensâ Associations gathered for their Annual Meeting. This was followed by this yearâs Seminar, entitled: âProjecting Stability: NATOâs new challenge?â which took place in the Maynard-Thorn Auditorium. Current courses (SC 133 and NRCC-20) took part, together with the NDC command group, staff and journalists.

General Petr Pavel (CZE), former Chairman of NATO Military Committee in Brussels, was also present throughout. In view of his many services to the NDC, and in accordance with the wishes of the Anciensâ Association, he was on this occasion named an Honorary Ancien by the Commandant of the NDC.

This yearâs panel was made up of NDC Faculty Adviser and Researcher Dr Kevin Koehler (DEU); and Dr Guillaume Lasconjarias (FRA), Defence Education Adviser at the French Ministry of Education. The panel and ensuing discussion were moderated by the Head of the NDC Research Division, Dr Thierry Tardy (FRA). Mr Matthew Fisher (CAN), columnist from Postmediaâs International Affairs of Canada, provided the concluding remarks. The invited speakers offered stimulating and informed perspectives on what is certainly one of the most challenging periods in recent years for the Alliance.

The Commandant underlined the importance of this yearâs chosen topic, in relation to the current instability in various parts of the world and the obvious interest in offering a forum for experienced Anciens to engage with future leaders on the many related challenges.

The afternoon was dedicated to the Annual General Meeting of the Anciensâ Association.

The Conference and Seminar afforded an important opportunity to forge new ties between Anciens and the current NDC community, and to involve all concerned in an in-depth analysis of current prospects and priorities for the Alliance. The Anciensâ Association has more than 7,000 members worldwide. The fact that many of them hold national or international positions of great responsibility reflects the high educational standards set by the College, and the excellent reputation it enjoys among Allied and Partner nations.