Headed by the Commandant, Lieutenant General Chris Whitecross, NATO Defense College Senior Course 133 visited Ankara on 11 December as part of the Regional Approaches, Partnership for Peace (PfP) & Istanbul Cooperation Initiative (ICI) Field Study. The Commandant, Course Members and participating faculty were welcomed by Major General Mustafa Oguz, Head of Strategic Department and acting Head of General Plans & Policy (J5) in the General Staff. He stressed the major virtues of the NATO Alliance: solidarity, sharing, mutual understanding and adaption. He concluded that the NDC adds to those values with its established focus on strategic thinking, education and inside knowledge of the Alliance. 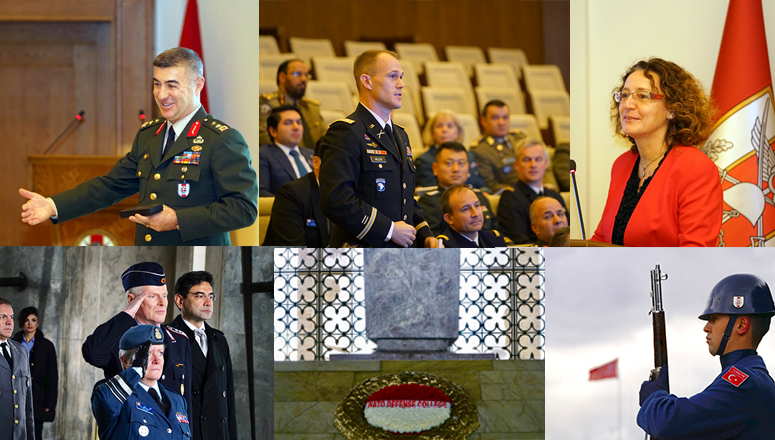 An Ancienne of the NDC, Deputy Director General for Policy Planning Mrs Istem Circiroglu gave an overview of the global and regional framework for Turkeyâs security policy. She explained how Turkey has adapted to the challenges, moving towards a more proactive, multi-dimensional, enterprising and humanitarian foreign policy based on priorities such as Turkish contributions to regional security and stability. She underlined how Turkey also applies global outreach by strengthening relations to countries worldwide with a holistic approach. She stressed Turkeyâs focus on the humanitarian - development nexus and mentioned the challenges for Turkey in hosting more than 3 million refugees, predominantly from neighbouring Syria.

Another NDC Ancien, Deputy Director General for NATO Policy Mr Burcin GÃ¶nenli, gave an overview of the many security challenges that surround Turkey. He stressed how NATO has been, and remains, a central element of Turkeyâs security and defence policy. Turkey therefore contributes significantly to the Alliance, including capacity building efforts with partners, as is the case with the training mission in Iraq, the Allianceâs Ballistic Missile Defence, Tailored Forward Presence and NATOâs activities in the Aegean Sea. He stressed the importance of the EU - NATO cooperation, and looked forward to increasing results of that cooperation.

Subsequently, Major General Mustafa Oguz provided a regional security overview by discussing the arc of conflicts and instability around most of Turkeyâs borders, and the countryâs role as a centre of stability. Failing states, power vacuums, terrorism and organized crime are just some of the multitude of complex challenges Turkey and NATO face. He stressed that these threats must be met by dialogue and a comprehensive approach. To this end, he detailed that Turkey contributes significantly to NATOâs deterrence and defence posture â and to 14 NATO and other international peacekeeping activities, in 11 locations, with 2,500 personnel. Adding to this, he reiterated the generous support to refugees in Turkey, and to internally displaced persons and stabilization efforts in Syria.

The Head of the International Cooperation Department in the Presidency of Defence Industries (SSB), Mr Murat Ceran, provided an overview of some major Turkish defence products and systems. Subsequently, he explained SSBâs role in the increasingly indigenous defence industry framework, the extended international cooperation and the evolution in defence procurement, recently making the SSB the sole procurement authority. The afternoon visit to the Turkish Aerospace Industry rounded off the industrial dimension of the visit to Ankara.

After briefings and lunch in the facilities of the Turkish General Staff, the NDC delegation laid a wreath at the AtatÃ¼rk Mausoleum in Anitkabir and visited the adjoining museum.

The NDC greatly appreciated the warm welcome, the comprehensive briefings and the in-depth answers during the question and answer sessions that underlined Turkeyâs role as a key member of the Alliance.