Headed by the Commandant, Lieutenant General Chris Whitecross, Senior Course 133 from the NATO Defense College visited Baku in Azerbaijan on 13th December, for the second stop in the Regional Approaches and Partnership for Peace (PfP) Field Study. 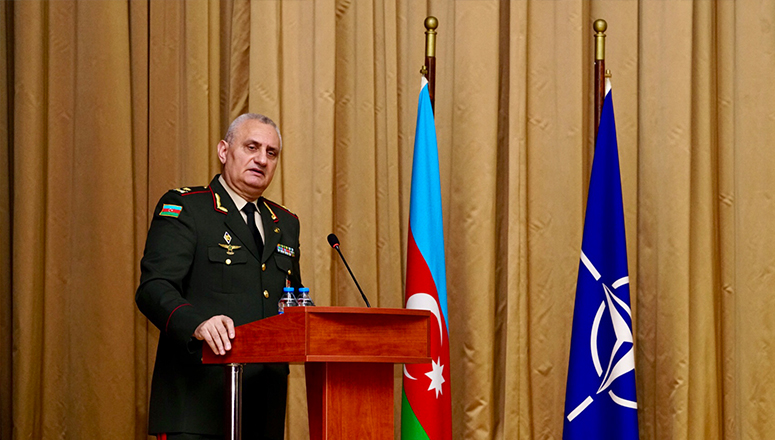 The Commandant, Course Members and participating faculty were warmly welcomed by the Head of the International Military Cooperation Department, Major General Huseyn Mahmudov, at the Armed Forces Training and Education Centre. He informed guests that over the years, 7 Course Members from Azerbaijan had attended the Senior Course at the NDC.

Major General Mahmudov, an NDC Ancien from SC 96, gave a comprehensive briefing on the volatile regional security environment, the threats and challenges, but also pointed to the opportunities that vast natural resources and a strategic geographic position provide Azerbaijan. He stressed the need for the international community to keep focusing on the region, the many different conflicts and broader security issues like terrorism, arms proliferation, organized crime, cyber and information warfare. He commented on some of the events in the region since 2008, including Azerbaijanâs conflict with neighbouring Armenia over Nagorno-Karabagh, which has caused casualties, refugees, displaced persons and economic losses. He disagreed with the use of the term âfrozen conflictâ and expressed his hope that the recent talks in Dushanbe would lead to results beyond the agreed cease-fire.

He continued by addressing Azerbaijanâs international military cooperation with 34 other countries, in particular Turkey, the US and other NATO countries, but also with 8 CIS countries. He described the defence and military cooperation within the trilateral partnership between Turkey, Georgia and Azerbaijan, which could lead to the formation of a trilateral brigade. He characterized Azerbaijanâs Individual Partnership and Cooperation Programme with NATO as â24 years of successful cooperationâ, which has contributed significantly to defence reforms, capacity building and the required level of interoperability among the armed forces and with NATO. Reforms, transformation and standardization have allowed Azerbaijan to move from a recipient to a contributor of security. To this end, he mentioned Azerbaijanâs contribution to NATO and to Coalition Peace Support Operations and also noted that two Azeri officers would soon be joining the United Nations Mission in South Sudan.

An Ancien of Senior Course 101 and Head of the Foreign Affairs Department of the Presidential Administration, Mr Hikmat Hajiyev, briefed the audience on Azerbaijanâs balanced foreign policy that is founded on the realities of geography, geo-politics and geology (natural resources). He mentioned the many challenges that Azerbaijan had to meet after the declaration of independence from the Soviet Union in 1991, including the need to host one million refugees. A wise use of the rich natural resources has helped Azerbaijan to become self-sufficient and overcome many challenges, but the political realities in the post-soviet space must always be taken into account. To that end, brotherly relations with Turkey and stable relations with other major regional powers, Iran and Russia, are vital. Azerbaijan wishes to see a revitalization of the non-aligned movement. This would not contradict involvement in various regional cooperation bodies, the strategic partnership agreement under negotiation with the EU and a good partnership with NATO that he characterized as âa love story without marriageâ.

Mr Hajiyev stressed that a viable model must be found to resolve the conflict with Armenia, in order to ensure improved regional political and economic cooperation and progress, including for energy and transportation projects.

The Advisor to the Minister of Energy, Mrs Esmira Jafarova, provided a briefing on Azerbaijanâs experience in producing hydrocarbons and its contribution to international sustainable development and global energy security. She outlined how foreign investments in the energy sector, and a series of Production Sharing Agreements allowed for the modernization and transformation of the entire economy. She addressed the issue of reducing the use of hydrocarbons and stressed that Azerbaijan is significantly increasing its export of natural gas. The Southern Gas Corridor will give prominence to Azerbaijanâs growing role as an energy supplier to European energy markets. Commenting on the important nexus between energy and security, she stressed the national and regional stability required to secure energy infrastructure and the export of energy resources.

This very instructive visit to Baku and the comprehensive briefings provided to the SC highlighted Azerbaijanâs role as an important NATO partner.