Senior Course 133 visited Hungary on 17 December, as part of its Regional Approaches and Partnership for Peace (PfP) Field Study. The Commandant, Course Members and participating faculty were warmly welcomed at the Ministry of Defence Institute and Museum for Military History in Budapest by Brigadier General Tamas Zsiga, Head of the Personnel Directorate in the Hungarian Defence Staff. 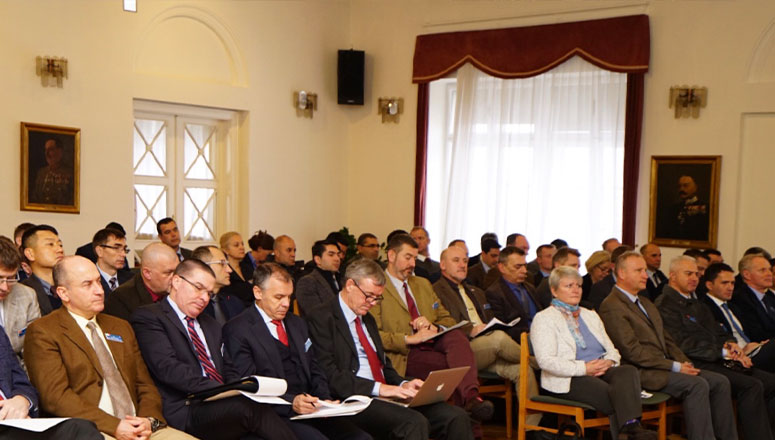 Dr Istvan Balogh, Deputy State Secretary for Security Policy and Political Director of the Ministry of Foreign Affairs and Trade, briefed the delegation on Hungarian foreign and security policy. He stressed EU and NATO membership as cornerstones of national security policy; Hungaryâs special focus on Central European and regional affairs, as highlighted by the Visegrad cooperation; increased political and trade relations to the East and South; further Euro-Atlantic integration of the Western Balkans; and significant attention to the rights of ethnic Hungarians within the internationally acknowledged borders of the neighbouring countries, in particular Ukraine. The need persists to counter illegal migration in a broader European framework that must aim at tackling the root causes where they occur, and also involve the broader development tools available to nations. Addressing the recent moves within the EU towards increased European defence capabilities, the speaker stressed that Hungary supports this development, with NATO as the primary guarantor of European security.

Mr Csaba Vezekenyi, Deputy State Secretary for Defence Policy in the Ministry of Defence, described Hungaryâs position at the intersection of Southern and Eastern challenges like terrorism, illegal migration, radicalization and the protracted crisis in Ukraine. Hungary watches the fragile peace in the Western Balkans very carefully. He stressed the militaryâs role as an albeit secondary responder to renewed, potentially massive illegal migration across Hungaryâs Southern borders, and Hungaryâs participation in NATOâs Defence Capability Building Initiative. Russia does not follow the rules; the Russian narrative must be countered, and NATOâs defence and deterrence posture strengthened to address both Eastern and Southern challenges. The member statesâ cash, capabilities and contributions must be increased in line with the statements made at the recent NATO summits. Hungary has taken the initiative to form the Headquarters of the Multinational Division - Central Europe (HQ MND-C), together with Slovakia, Slovenia and Croatia. Hungary has also shown measurable solidarity with the Eastern member states bordering Russia, by contributing inter alia to Baltic Air Policing. On the other hand, Hungary has continued a bilateral dual-track approach with Russia, including business relations in the energy sector. Regarding the increased momentum of the EUâs Common Security and Defence Policy to support its Global Strategy, mention was made of Hungaryâs contribution to PESCO projects and CSDP operations, as well as its wish to achieve improved deployability of the EU Battlegroups.

Brigadier General Dr Imre Pogacsas, Head of the Armament Development Programmes Department in the Ministry of Defence, is an Ancien of SC 129. He briefed the NDC group on Hungaryâs adaption to the many current challenges in accordance with the âZrinyi 2026 Home Defence and Armed Forces Development Programmeâ. Hungary aims at living up to Summit declarations made since 2010 by implementing firm and adaptable defence planning, aligned with the NATO Defence Planning Process, the intention being to reach the 2% of GDP goal in 2024. The increased defence budget will allow for acquisition of a number of equipment systems like C4ISR, C2, air defence, materiel and equipment for a heavy armoured brigade, helicopters, fixed wing aircraft and vehicle capabilities.

Lieutenant General Dr Gabor BÃ¶rÃ¶ndi, Deputy Chief of Defence of the Hungarian Defence Forces and also an NDC Ancien, underlined the demand for the Hungarian Defence Forces to protect Hungaryâs land and air space while working effectively with NATO forces in Hungary or abroad. Financial resources must be spent wisely, and there is no room for mistakes. Beyond the existing niche capabilities and the contribution to international operations, C2 systems must be deployable, resilient and sustain interoperability. A cyber capability must also be developed. Hence, it will be a major task to renew the military organization and its inventory. A voluntary reserve system must be developed: this presupposes an update in training and, in particular, a change of mindset.

The NATO Defense College greatly appreciated the warm welcome, the comprehensive briefings and the in-depth answers during the question and answer sessions, underlining Hungaryâs unique role within the Alliance