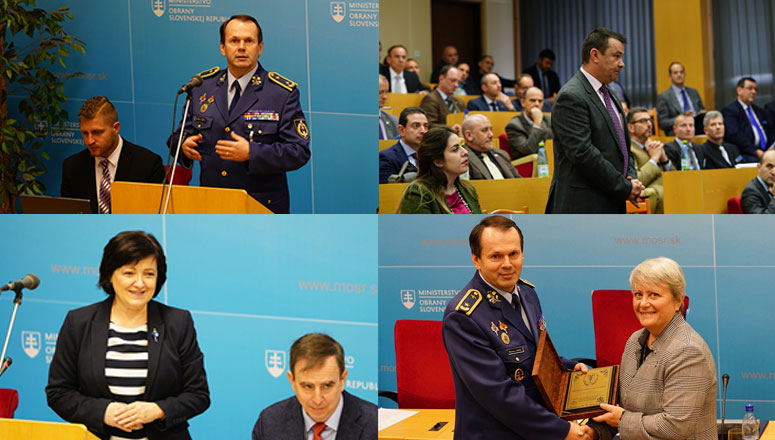 On 18th December, the Commandant, Course Members and participating faculty were warmly welcomed to the Slovak Ministry of Defence in Bratislava by Mrs Bohuslava Lukacovicova, Head of the Transatlantic Affairs Unit, who gave a short overview of Slovakiaâs history, with special attention to their peaceful access to independence in 1993. She mentioned that, from 2014 to 2018, Slovakia increased its defence budget by almost 40% and expects to meet the 2% of GDP target by 2024, or even as early as 2022. She highlighted major international relations: Slovakia fully supports the adaption and strengthening of NATO; participates in the EU defence dimension; wishes to strengthen the OSCE during the Slovak chairmanship next year; focuses especially on Central European and regional affairs, as witnessed by the Visegrad cooperation; and supports further Euro-Atlantic integration in the Western Balkans, while remaining concerned about events in Ukraine. The US remains the key bilateral defence cooperation partner.

An NDC Ancien from 2008, Mr Peter Slovak, from the Defence Planning Department of the Ministry of Defence, presented the countryâs priorities and goals in defence planning, in line with Slovakiaâs international commitments, including the NATO 2/20 Defence Pledge. He briefly outlined the legal framework and referred to the strategic documents, and stressed the alignment of the national defence planning effort with the Long Term (Capability) Development Plan in NATOâs Defence Planning Process, as well as with EU capability building activities within the CDP / PESCO framework. He described Slovakiaâs lead in one PESCO project and participation in four others, and discussed the critical issue of recruiting and maintaining personnel in the Armed Forces as essential for defence transformation.

Mr Dusan Fischer, from the Modernization Department at the Ministry of Defence, briefed on the current modernization plans for the Slovak Army and Air Force and the vision for modernization and capability development projects in the mid-term period, based on four key principles: SMART (Western) capability solutions; NATO interoperability; resource management and relations with the domestic industry.

Mr Martin Melisek, from the Infrastructure Branch at the Ministry of Defence, gave a description of the projects in Slovakia that have been fully, or at least partly, funded by NATO common funding, under the NATO Security Investment Programme (NSIP). He gave examples, such as improved airforce infrastructure and RSOM facilities to support NATO units, and ended his presentation by providing a short overview of some future NSIP investments in Slovakia.

Brigadier General Miroslav Lorinc, Deputy Chief of Defence, welcomed the group to the General Staffâs part of the day, giving the floor to Colonel Norbert Tornyai, Chief of J3 of the Strategic Planning Division. He gave an overview of the history, legal framework and organization of the Armed Forces of the Slovak Republic, which underwent a transformation from a heavy Cold War posture to a much smaller post Cold War dimension and now, not unlike other NATO members, faces the challenge of adapting to the new security situation.He went on to describe the many land and air modernization projects made in accordance with the priorities and ambitions of the Long Term (Capability) Development Plan and available finances. He also gave details on Slovakiaâs contribution to the UN, the EU, and NATO operations, staff and capability development initiatives; the present contribution to the NATO enhanced Forward Presence (eFP) Battle Group in Latvia, and the Slovak forces attached to the NATO Response Force / Very High Readiness Joint Task Force (NRF/VJTF) and EU Battle Groups since 2006, within the Visegrad regional defence cooperation framework. Finally, he stressed the priorities for 2019 within the four lines of effort: readiness; international commitments; capability development; and knowledge and information management within staffs.

Colonel Jozef Svitka, from Planning and Control Operations, presented the engagement of Slovak Armed Forces in crisis operations with the United Nations, the OSCE, the EU, and NATO and Coalition missions and operations since 1993. More than 18.000 personnel have been deployed. He described Slovakiaâs participation in current international missions in Iraq, Afghanistan, Bosnia and Herzegovina, Georgia, Cyprus and UNTSO in the Middle East, and re-iterated Slovakiaâs priority contribution of 152 personnel to eFP in Latvia.