Senior Course 133 visited the Czech Republic on 19 December 2018, as the last stage on its Regional Approaches and Partnership for Peace Field Study. The delegation was welcomed in the Congress Hall of the Military Club in Prague by NDC Faculty Adviser Colonel Martin Bulka (CZE F). He gave a short overview of the dramatic history that led the Czech Republic to see no other alternatives than common defence and security solutions within primarily NATO and the European Union (EU). 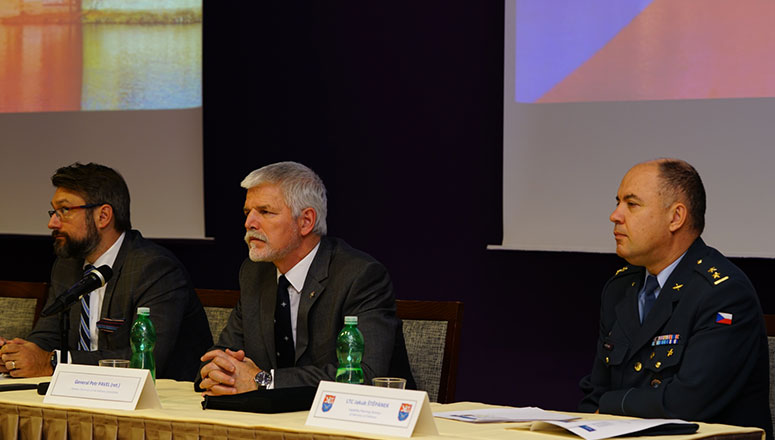 Mr Pavel Vacek, Director of the Security Policy Department of the Ministry of Foreign Affairs, briefed the NDC group on the security policy of the Czech Republic. He referred to the 2015 Security Strategy that describes the national and international strategic context, basic principles and vital interests, adding that frequent updates and upgrades of the strategic framework are needed. He pointed out that, while the 2010 Strategic Concept does not name any states as enemies or opponents, Russia has taken up a confrontational political and military approach, also beyond its immediate borders; the multi-layered, âfrozenâ conflicts result from âa clever Russian strategyâ. New threats like hybrid and cyber have therefore been addressed in recent years, but more must be done in a broad framework. Related to the EU, the speaker attached importance to capability development within the Capability Development Plan / Permanent Structured Cooperation (CDP/PESCO) framework, adding that NATO remains the primary collective defence organisation, whereas the EU is perceived as predominantly relevant in a crisis management and collective security perspective. Dialogue with Russia has become a challenge to NATO, the EU and other international organizations, but it is necessary. In this light, the Organization for Security and Co-operation in Europe (OSCE) unfortunately suffers from Russian aggressiveness and lack of respect for established treaties. The speakerâs Christmas wish was for the OSCE to regain its position as a forum for structured dialogue and interaction, arms control and confidence building measures.

Dr Mgr Jakub Landovsky, Deputy Minister and Head of the Defence Policy and Strategy Division of the Ministry of Defence, spoke about the Defence Strategy of the Czech Republic, based on a whole of government approach with contributions to European and global security to reinforce security on the national borders. It is the intention to reach the 2% defence spending pledge by 2024, to sustain the needed build-up of full-spectrum, interoperable and deployable capabilities, including a modern, armoured infantry brigade, host-nation capabilities, up to 5,000 extra personnel in the Armed Forces, and a reserve force structure. Germany is a key regional partner, with one brigade affiliated to the 10th German Armoured Division. The Czech Republic also contributes to eFP and Baltic Air Policing. Finally, the speaker described the Czech contributions to NATO, EU, coalition and UN missions and operations, NATO NRF/VJTF and EU Battle Groups: the Czech Republic leads in one project, and participates in six others within the CDP/PESCO framework.

Lieutenant Colonel Jakub Stepanek, of the Capability Planning Division in the General Staff, then spoke about 'the build-up procedures and development of force capabilities within the Czech Armed Forcesâ. He gave a brief overview of the strategic security documents guiding the âConcept of Czech Armed Forces Development 2025 Planâ (KVACR 2025), in full synchronization with the milestones of the NATO Defence Planning Process and longer term planning up to 2035. He discussed the national and international defence priorities, the main capability areas and related key milestones. Following an analysis of the external and internal security, financial and demographic risks to the implementation, he concluded optimistically on the strengthening of the Czech Armed Forces.

General (ret.) Petr Pavel, former Chairman of the NATO Military Committee, offered a strategic, global perspective on NATOâs present and future. âNATO 360 Degreesâ has been a convincing political argument, and political consensus is important, but it must not lead to a situation where no priorities are made. Russia has become an increasingly aggressive actor, but it is also experiencing a slow economic and demographic decline. However, not all countries agree to one picture of Russia and, in particular, its âunder the thresholdâ activities to destabilize, influence and create Cold War-like zones. This remains a problem to the cohesion of the Alliance. More generally, broad means must be applied by a broad range of actors, including the EU and NATOâs other partners. Europe must stay united to remain a global player in the global playground; the Europeans must look beyond their own continent. The strategic competition between the US and China also includes a security dimension; military conflicts cannot be excluded.

The session was concluded by a discussion with the Vice Chairman of the Committee of Defence of the Chamber of Deputies of the Czech Republic, Mr Jan Lipavsky. He described the structure of the Parliament, the functional committees and the key responsibilities related to the Armed Forces: 1) approval of international deployments that the Czech Republic can allow itself, due to its favourable position among EU member states and NATO allies; 2) approval of inter alia the defence budget, which makes the role of the defence committee essential and effective cooperation with the Ministry of Defence mandatory; and 3) overseeing the Military Security and Intelligence Agency. The speaker used the Czech experience in the UK Novichok incidents from March 2018 to explain the cooperation between the Parliament, the Government, state institutions and other actors.

The NATO Defense College delegation greatly appreciated the warm welcome, the Czech hospitality, the comprehensive briefings and the in-depth answers during the question and answer sessions that underlined the unique geographical position of the Czech Republic and its contribution to international defence and security.