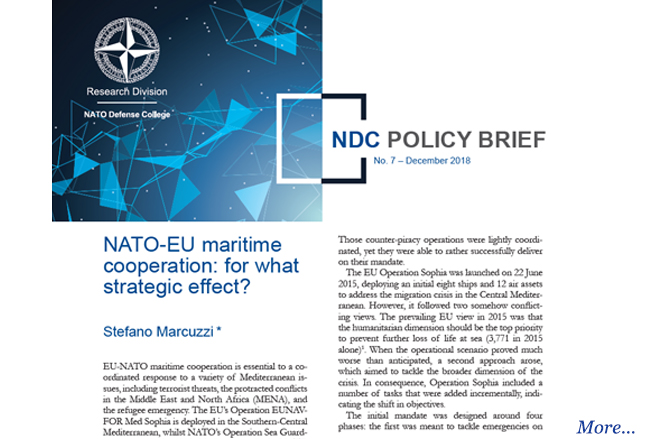 "EU-NATO maritime cooperation is essential to a coordinated response to a variety of Mediterranean issues, including terrorist threats, the protracted conflicts in the Middle East and North Africa (MENA), and the refugee emergency. The EUâs Operation EUNAVFOR Med Sophia is deployed in the Southern-Central Mediterranean, whilst NATOâs Operation Sea Guardian operates in the whole Mediterranean basin. NATO also launched a new activity in the Aegean in 2016. Although each operation has its own mandate, their coordination was defined as crucial in the 2016 Joint Declaration on EU-NATO cooperation".
"At a tactical level, these operations have by and large been successful in enhancing situational awareness in the Mediterranean; monitoring migration networks; constraining the activity of human and arms smugglers on the high seas; and to a degree in providing assistance to migrants. However, they also face strategic challenges, including the failure to dismantle the smugglersâ networks, their relatively low deterrent effect, and a limited degree of inter-institutional cooperation".