The NATO Defense College (NDC) in cooperation with the Nuclear Policy Directorate of the Defence Policy and Planning Division (DPP) at NATO HQ is pleased to open a call for papers on nuclear deterrence.

Authors of the selected papers will be invited to participate to the first edition of its Early-Career Nuclear Strategists Workshop (ECNSW) to take place from 1st to 3rd July 2019 at the NDC in Rome (ITA). 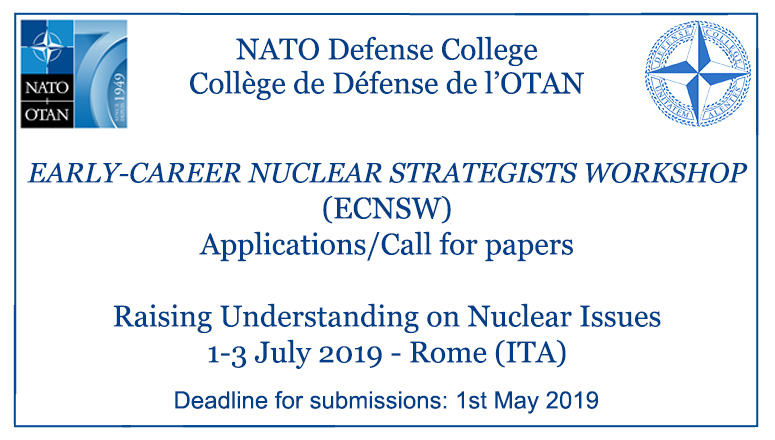 Background
The Russian annexation of Crimea and the ongoing conflict in Eastern Ukraine, as well as Russian President Putin’s reliance on veiled, or more overt, nuclear sabre rattling, have brought nuclear deterrence back into the strategic debate for both scholars and practitioners. Nuclear deterrence requires human capital with particular competencies, understanding and skills. However, the pool of human capital needs to be revitalized as with the end of the Cold War, and the following attention to out-of-area so-called asymmetric threats (such as terrorism and insurgency), questions related to deterrence, in general, and nuclear deterrence in particular, have been to some extent neglected.

Goals
The workshop aims at enhancing and disseminating such competencies, understanding and skills on nuclear deterrence, in order to forge a new generation of nuclear strategists. The workshop has three main goals:

Participants and Eligibility
The NATO Defense College is seeking analytically strong, intellectually curious, energetic scholars and practitioners interested in furthering their understanding of in-depth questions related to nuclear issues.
The workshop will bring together approximately 20 early-career scholars from NATO countries, as well as 10 to 15 officials from both NATO and its member states. A select group of senior scholars and officials will provide a number of top-down lectures and contribute to facilitating discussions.
Applicants should be under the age of 40 by 31st December 2019, hold a PhD in any discipline (for scholars) or have at least 5 years of work experience in government or international organizations (for officials).

Format
The Workshop will be split into two parts:

Early-career scholars should send an email by 1st May 2019 to ecnsw2019@ndc.nato.int with:

NDC will cover transportation and accommodation expenses for all scholars.

The paper should deal with one of three issues:

Early-career officials from both NATO and its member states will be funded by their respective institutions. They should send a one-page CV along with a letter of support from their division supervisor to ecnsw2019@ndc.nato.int.