On Monday 15 April 2019, the NATO Defense College was honoured to welcome the President of Albania, H.E. Ilir Meta, who delivered a lecture of opportunity to Senior Course 134, NATO Regional Cooperation Course 21, and College faculty and staff. 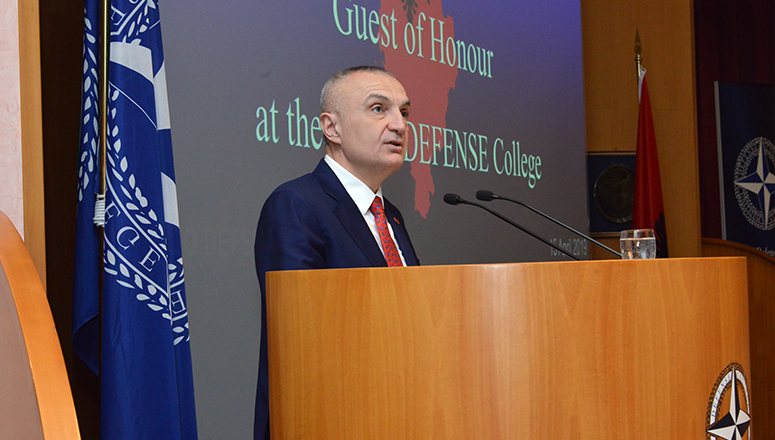 The President and his delegation, accompanied by the Ambassador of the Republic of Albania to Italy, H.E. Mrs Anila Lani, and senior representatives from the Albanian Embassy in Rome, were warmly welcomed by the NDC Acting Commandant and Dean Dr Stephen J. Mariano, and other members of the NDC Senior Leadership.

During his visit, the President delivered a thought-provoking lecture on ‘Albania’s key role towards peace, stability and security in the region and its contribution in the integration of Western Balkan countries to NATO’. The lecture, which was followed by an excellent Q&A period, was attended by Ambassadors and members of the Diplomatic Corps in Rome, as well as by Senior Course 134, NATO Regional Cooperation Course 21, and College faculty and staff.

H.E. President Ilir Meta was born in Skrapar, on 24 March 1969. He graduated in Political Economics from the University of Tirana, where he also followed postgraduate studies. Ilir Meta began his political career in 1990. He was elected member of the General Steering Committee at the June 1992 Congress, and member of the Socialist Party Presidency from 1993 until July 2003, when he resigned. In September 2004, Ilir Meta founded a new political force in Albania, the Socialist Movement for Integration (LSI). He was State Secretary for European Integration in the Ministry of Foreign Affairs from March to October 1998, and then Deputy Prime Minister and Minister of Governmental Coordination between October 1998 and October 1999. From November 1999 to February 2002, he was Prime Minister of Albania, and was reconfirmed after the 2001 parliamentary elections. Since 1992, Ilir Meta has been an elected Member of Parliament in all legislatures of the Albanian Parliament. In September 2013, Ilir Meta was elected Speaker of the Albanian Parliament, a position he held until 28 April 2017, when he was elected President of the Republic of Albania.