On Monday 13 May, as part of its ‘Transatlantic Link’ Field Study, SC 134 visited the Pentagon. A group of Course Members were briefed by Mr Bruce Hollywood from the Air Space Command about challenges facing US Air Force Space Command in developing US space and cyber capabilities, and the requirement of integration of those two domains. 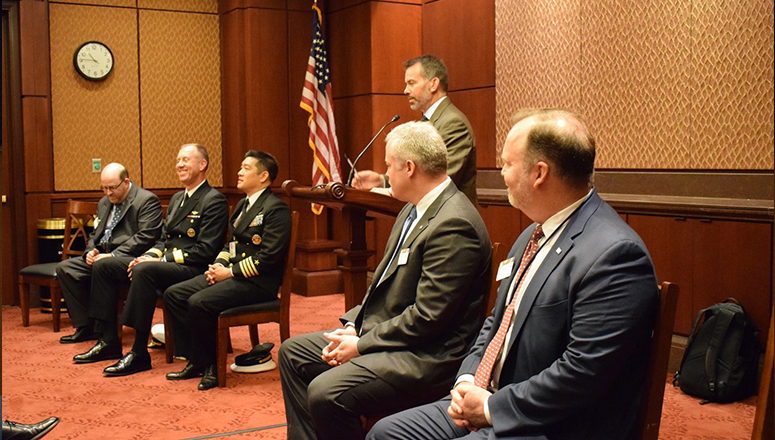 In this unclassified briefing and the Q&A session, SC 134 also learned about the US Space Force Legislative Proposal, aiming at a sixth branch of the US Armed Forces within the Department of the Air Force, and initiatives to integrate commercial with military partners.

The rest of NATO SC 134 attended two interesting briefings, on nuclear policy and on cyber warfare.

On Tuesday 14 May, SC 134 visited Capitol Hill. The group were welcomed by Mr John Daly from the Office of Marine Corps Legislative Affairs, who explained the lobbying system in the US, the relationship between the security community and the Foreign Affairs Department, and the role played by the Department of Defense in supporting US Foreign Affairs activities.

LTG Jim Pasquarette, Deputy Chief of Staff Army G-8 responsible for the Army’s resources and requirements, then explained the close relationship between strategy, budget and funding.

After this, there was an excellent panel discussion with JCS J3, RADM George Wikoff; JCS J5, USN CAPT Mark Asuncion; National Security Council Director for Strategic Planning, Mr Charles J. Mclaughin; Department of State Deputy Director of the Bureau of Regional Security and Political-Military Affairs, Mr Tamir Waser; and Deputy Assistant Secretary of Defense for Strategy and Force Development, Dr Dan Green. They covered a wide spectrum of topics such as the relationship between NATO, the USA and the EU, as well as the US’ strategic challenges and the future of the transatlantic link. Panellists commented on the risks of disengagement between the US and Europe, stressing the need for unity.