Senior Course 134 visited Romania on 11 June 2019, on the first stage of its ‘European Perspectives II’ Field Study. The delegation, led by NDC Commandant LGEN Chris Whitecross, was welcomed at the National Defence University (NDU) in Bucharest by NDU Commandant BGEN Gheorghe Calopareanu. This visit underlined the excellent cooperation between the NDU and the NDC. 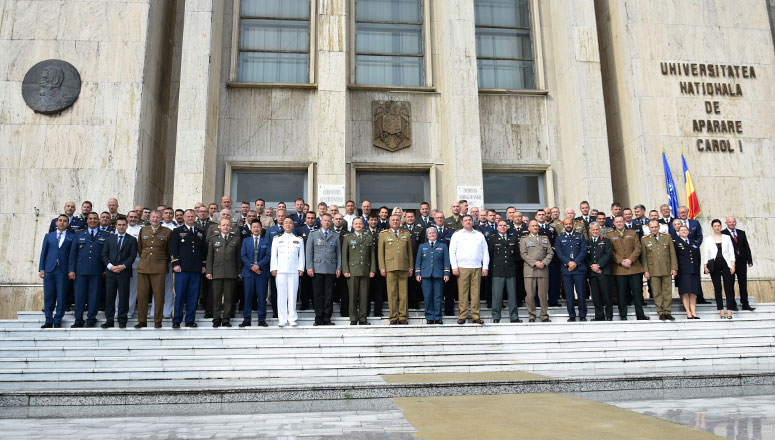 MGEN Iulian Berdula from the Romanian General Staff, Strategic Planning Directorate, spoke about Romanian national defence strategy, highlighting the Defence White Paper and the subsequent Military Strategy as the guiding tools for the Romanian Armed Forces Development Plan 2026. Against this backdrop, he then covered the security challenges of the broader Black Sea region. In particular, the main line of Russian offensive military strategy was explained and the speaker focused on how Romania and neighbouring countries, despite their different strategic cultures, prioritize cooperation in the defence and military field. Financial and demographic constraints were mentioned as the main challenges,

Dr Stefan Tinca, Director General, Policy Directorate of the Ministry of Foreign Affairs, then spoke about Romanian foreign policy. Part of his talk was dedicated to the Romanian Presidency of the EU Council, which will end next month. In this respect, the speaker looked at Common Security and Defence Policy, the EU’s Eastern Partnership with Ukraine, Moldova and Georgia, as well as a number of EU challenges in Central Asia.

The NDC delegation greatly appreciated the warm welcome and hospitality, the comprehensive briefings and the in-depth answers during the Q&A sessions, allowing participants to better understand Romania’s unique geographical position as well as its contribution to European and broader Black Sea defence and security.