Senior Course 134 visited Turkey on 14 and 15 June, on the third stage of its ‘European Perspectives II’ Field Study. The Commandant, Course Members and participating Faculty were welcomed by Major General Reha Ufuk Er, Chief of Plans and Policy Division of the Turkish General Staff. He stressed the major virtues of the NATO Alliance as key guiding principles for dealing with contemporary challenges: solidarity, burden sharing, mutual understanding and adaptation. 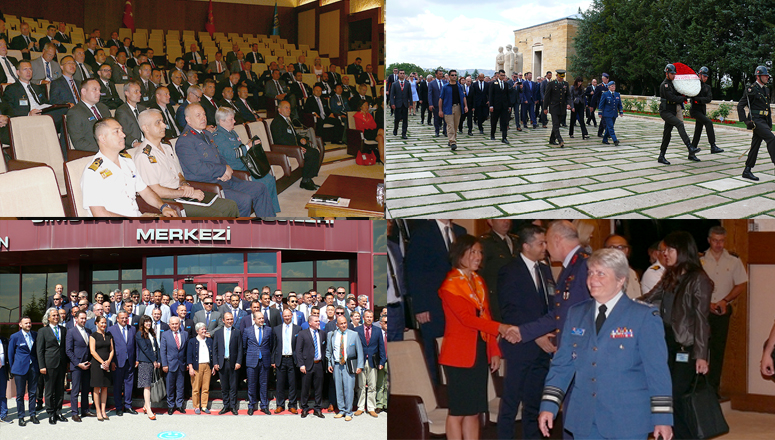 Deputy Director General for Foreign Policy and coordination, Ms Basak Jalcin, gave an overview of the global and regional framework for Turkey’s foreign policy development and priorities. Advancing strategic relations with NATO and the US, and the continuation of dialogue with the EU about full membership, are high on the list of Turkish foreign policy priorities. Crisis management, regional security and stability, as well as protecting the rights of Turkish citizens abroad, have been achieved through outreach and by strengthening the number of diplomatic delegations from 143 in 2002 to 242 in 2019. In conclusion, Ms Jalcin underlined Turkey’s focus on the humanitarian - development nexus and mentioned the challenges for Turkey in hosting 3.6 million Syrian refugees.

Deputy Director General for NATO and Euro Atlantic Security Affairs Mr Burçin Gönenli, an Ancien of Senior Course 103, gave an overview of Turkey’s main security challenges. His emphasis on how NATO has been, and remains, a central element of Turkey’s security and defence policy was supported by identifying Turkey’s significant contributions to the Alliance (e.g., capacity building efforts with partners like Iraq, ballistic missile defence, Tailored Forward Presence, and NATO activities in the Aegean Sea).

Captain (N) Ozgur Ozcan Altunbulak, Assistant Director General of the Security and Defence Directorate, provided a regional security overview by discussing the arc of conflicts and instability around most of Turkey’s borders, with the country playing a role as a centre of regional stability. Failing states, power vacuums, terrorism and organized crime are just some of the multitude of complex challenges Turkey and NATO face in the increasingly complex security environment. These threats must be met by dialogue and a comprehensive approach: to this end, Turkey contributes significantly to NATO’s deterrence and defence posture – and to 14 NATO and other international peacekeeping activities.

Colonel Alba Erdogan Catal, Chief of the National Strategy Branch at the Turkish General Staff, described the Turkish strategy on defence against terrorism, looking at the different actors that pose an existential threat to Turkey. The lecture pointed out the importance of relativizing cognitive biases and need for an informed, rational perspective on a discussion that tends all too often to become emotionally charged.

The Head of the International Cooperation Department in the Presidency of Defence Industries (SSB), Mr Murat Ceran, provided an overview of some major Turkish defence products and systems. SC 134’s earlier visit to the production facilities of the Havelsan Company, the largest technology and software developers in Turkey, had perfectly set the scene for Mr Ceran’s talk. He also explained SSB’s role in the increasingly indigenous defence industry framework, the extent of Turkey’s international cooperation, and the evolution in the defence industry as pillars on the modernization of the Turkish defence forces.

In the afternoon, the NDC delegation laid a wreath at the Atatürk Mausoleum in Anitkabir and visited the adjoining museum.

The NDC greatly appreciated the excellent welcome it received in Ankara, the informative and detailed briefings, as well as open and candid Q&A session.